Why does the new year start on January first? 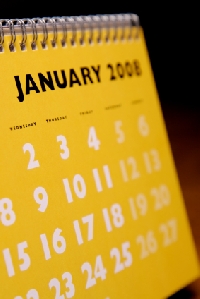 Find out more about a date we take for granted that has a curious history.

The answers to this question vary widely from one culture to another. In the West the answer might be, “because Pope Gregory XIII said so.” Countries observing the Eastern Orthodox Rite might respond, “Ask Julius Caesar.” Those of Hindu, Buddhist, or Jewish faith would say, “It doesn’t begin on January 1st at all.”

Before you continue reading about the Why does the new year start on January first? there is a special announcement we would like to share with you. Catalogs.com has negotiated special medicare rates for our vibrant community of seniors. If you are over the age of 60, you can head over to our Seniors Health Section which is full of information about medicare. All you need is your zip code and a few minutes of your time to potentially save 100s of dollars on your medicare bills.

To understand why the Western New Year begins on January 1st requires reflecting a bit on how calendars are constructed and why. One easy explanation of a calendar to young children is that it’s a way grownups organize time. Just as we group days into weeks and number the hours, naming the months and the seasons reflects our need to understand how the world works.

Every calendar tells a story. In China the origins of the Buddhist calendar are described as lost in the mists of mythology. One legend dates the origins of the current year, 4706, to a time when Buddha asked all the animals to meet him on New Year’s Day. Only 12 animals came and Buddha named a year for each of the twelve. Thus, 4706 is the Year of the Rat, beginning on February 7, 2008.

Because of the wide diversity of people inhabiting regions of India, there is no universal Hindu calendar. Regional celebrations of major holidays may occur on different days and even in different seasons. According to the Vedic calendar, the new year is 5109 and begins in April. The Indian National Calendar, an attempt to harmonize secular and religious calendars in 1957, counts its years from the Western year 78; one of its most unifying features is the new year’s beginning at the spring equinox.

The Baha’i faith, practiced by Turkic and Iranian people, also declares the vernal  equinox (first day of spring) as New Year’s Day. Muslims, whose calendar is strictly lunar, totaling approximately 354 days, will have the unusual experience of celebrating New Year’s Day twice during 2008. To Jews the year has been determined by complex historic calculations of people’s ages in the Bible. The first month of the new year 5768 is in the spring month of Nissan, although the official New Year’s holiday falls in the autumn month of Tishri.

The Calendar and the Solar System

What all calendars appear to have in common is the attempt to harmonize understanding of the earth’s, moon’s, and sun’s related movements, reflected in periods of light and dark and seasons of the year. The frequent start of the new year in springtime tells us much about how early agriculturally-based societies reacted to annual cycles of light and dark and feared the sun might never return after winter’s darkness.

To Julius Caesar, a single, consistent calendar that could be applied to the territories of Roman conquest, was a political tool. While conquered cultures were given some freedom to retain their religious and social customs, a common calendar served as a constant reminder of Roman authority. It was Julius Caesar (hence the Julian calendar) who departed from centuries of agricultural custom, declaring the first of January the first day of the new year.

January 1st was the day when new consuls were chosen; a year was customarily given the names of these important rulers. The Julian calendar reflected attempts at reform begun by the Roman Senate in 153 B.C. to realign lunar months with solar seasons. Caesar made the great adjustment of declaring 45 B.C. a 445-day year to realign the calendar and the sun, but future work awaited. Every year, a 12-month lunar calendar ran short of solar observations, while a 13-month year (a leap-year strategy used every two to three years in the Jewish lunar calendar) lran onger than the solar cycle.  The frequent addition of leap days produced as much confusion as coordination.

The spread of Christianity provided the next impetus for calendar-reform. Modifications had narrowed the gap between seasons and holidays, but by 1582 the Julian year was 10 days out of alignment with the solar year. Pope Gregory XIII, responding to the yearly frustrations of fixing the date for Easter, the highest festival of the Christian year, promulgated a calendar based more strongly on the sun than the moon, employing a single leap day every four years to keep it in alignment.

Most Catholic countries adopted the Gregorian calendar quickly, with Protestant and Eastern European countries following more slowly. Historic divisions between Western Catholicism and Eastern Orthodoxy meant that the Eastern Rite continued to follow the Julian calendar (to this day, Western and Eastern Easters only occasionally occur on the same Sunday). Russia remained Julian until the 1917 revolution. British subjects went to bed the night of Wednesday, September 2, 1752, and awoke the next morning on Thursday, September 14.

Calendars are a way that grownups organize time, but clearly not all grownups do it the same way. Happy New Year, therefore, whenever it happens for you.