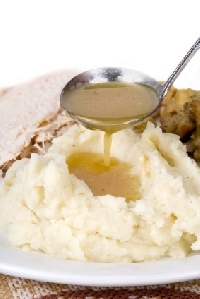 Is the sleepy turkey a metabolic process or myth?

Just as guests at a Thanksgiving table tend to have strong opinions about light or dark turkey, so the investigators into what has been called tired-turkey syndrome or the turkey-nap connection have strong opinions of whether it’s the turkey or some other component of Thanksgiving dinner that often makes you crave a good nap. One party in the discussion asks Why does turkey make you sleepy? while the other wants to know Why does turkey make you sleepy?

Both parties agree that the argument is based on the behavior of a critical amino acid that helps build certain proteins. Turkey like other meats and cheeses contains the amino acid L. tryptophan. L tryptophan is believed to have a slightly sedative effect and is known to play a role in the process of forming serotonin, a neurotransmitter that helps the brain and body regulate sleep. To one group the metabolic path seems fairly straight and level: turkey, L. tryptophan, brain, serotonin then nap.

Close up, others argue, the path is neither straight nor level. They trace the origins of the turkey-nap quandary back to the 1980s, when L. tryptophan-serotonin relationship was regarded as sufficiently strong to warrant the marketing of L. tryptophan as a food-supplement, ameliorating depression and poor sleep, an alternative to clinical anti depressants and narcotic sleepaids.

In 1989 high doses of L. tryptophan was indicted in an unusual and large outbreak of eosinophilia-myalgia syndrome (an autoimmune disease characterized by flu-like symptoms, severe muscle-pain, progressive scarring of nerve and muscle tissues, permanent changes to the immune system and, in 37-38 cases, death). The possible causal connection between L. tryptophan and the disease resulted in the 1991 U.S. Food and Drug Administration‘s banning supplements containing 100mg of L. tryptophan or more. Most of the outbreak was traced back to a Japanese food-supplement manufacturer where fermenting and cooking extremely large lots of L. tryptophan resulted in contamination. Scientists continue to explore the relationship between L. tryptophan and eosinophilia-myalgia syndrome. Critics suggest that the FDA received intense pressure to ban the supplements from the pharmaceutical industry, which was in the process of developing Prozac and a number of  anti-depressant drugs that also affected serotonin levels.

How Sleepy Do You Get?

Returning to Thanksgiving, critics argue that turkey, even with seconds, does not contain enough L. tryptophan to produce solid sleepiness. They hold that, unless turkey is eaten alone, on an empty stomach, it would be unable to forge its way through the complex of amino acids flooding the brain during a good and generous meal with sufficient force to produce sleepiness. Rather, while acknowledging the potential contribution of turkey, they ascribe sleepiness to what can be called turkey-and.

Fats are implicated as a source of sleepiness, drawing blood flow from other parts of the body including the brain for the process of digestion. The most likely culprit in the turkey-nap connection is everything else on the plate: a distinctly large variety of carbohydrates. Stuffing, potatoes, vegetables, rolls, alcohol and traditional pies all add to the carbohydrate roster. Metabolically, the large amount of carbohydrate calories stimulates the pancreatic production of insulin, which then produces the uptake of most amino acids, except L. tryptophan, into muscle tissue. This uptake of amino acids into muscle permits larger amounts of L. nortryptophan to enter the brain, resulting in production of serotonin. The path is now curvy, crowded and somewhat bumpy: turkey, all the carb trimmings, seconds, insulin, majority amino-acid uptake, L. tryptophan, serotonin then nap.

Two other factors, which do not appear in scientific studies but can by supported by anyone who has actually gotten Thanksgiving dinner, also contribute substantially to the turkey-nap connection. Americans love Thanksgiving and show it by making the Thanksgiving weekend one of the highest-travel periods of the year. Thus, getting the meal can also be described as turkey-and. Turkey and house cleaning, guest beds, rides to the house and back to the train station or airport, laundry, shopping and cooking. The turkey-work-nap connection is not just whether you want light or dark meat.

The other factor is relief. Thanksgiving may be one of very few days all year that families gather together and the reasons may not be strictly geographical. If no one has a puberty-based tantrum about still being at the kids’ table; if the dog doesn’t nibble anything or anybody; if football doesn’t rule the whole day; if absolutely no one feels compelled to tell the umbrella joke again, there’s the turkey-nap connection in a nutshell.