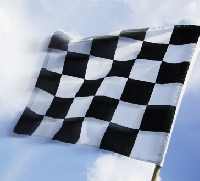 Auto race flags have been an important part of the history of racing since the earliest petrol-fueled automobiles raced in Chicago in 1895. Since that time, auto race flags, made from materials containing specific colors, designs and emblems, have been a vital form of communication between race car drivers and race officials, during races where speed, timing, focus and attention to detail are imperative.

As you watch the action on the track, have you wondered what are the flags used in auto racing?

The patterns, designs, colors, locations, and even the direction or waving motion of a flag held by a race official can all relay different meanings.  These messages conveyed by these flags are particularly valuable to race car drivers who can quickly interpret the meaning of a specific flag to make split second decisions or take necessary safety precautions to avoid dangerous racing conditions.

No one knows for sure where the design of the checkered flag first originated. Some historians cite the early horse races in the America Midwest as the birth place of the checkered flag. These early American horse races were public events that would typically be followed by a large meal or community picnic. When the races were over, a checkered tablecloth would be waved to signify the close of the event and the start of the meal.

The green flag is always waved at the start of an auto race. It is also displayed at the end of a delay or temporary caution period, to indicate that a race is re-starting. If a race is scheduled to start on time with out any delays, it is said to be under ?green flag conditions.?

The solid yellow flag is a universal indication of caution, advising racers to slow down for hazards on the track. However, the particular motion or location of a yellow flag can have very distinct meanings.

A single stationary yellow flag denotes a hazard off of the course, while a single yellow flag waved by a race official indicates a hazard on the racing surface itself. Two yellow flags waved simultaneously sends the message that a hazard wholly or partly blocks the race track and that that drivers should be prepared to stop if necessary.

The yellow and red striped auto race flags are displayed to inform drivers that there is something on the track which could reduce grip or cause a car to lose control. For example, oil spills, coolant, sand, glass or debris from crashes are all elements that can be potential hazards on a race track.

In the sport of auto racing, the solid red flag indicates that a race must be stopped due to unsafe conditions. Severe weather, rain, hail or darkness are all environmental reasons for ?red flagging? a race. Muti-car crashes, driver injuries or fatalities, severe damage to walls fences or track surface, or fires on the track are all significant race hazards that may prompt officials to raise the red flag.

The black auto race flags which contain an orange center disk have been nicknamed as ?the meatball flag? by race car drivers. This flag is waved at a particular race car to indicate that that specific car is being summoned to the pit for mechanical issues that are either interfering with a race, or could potentially interfere with a race. Race officials usually respond to fuel, water or oil leaks by waving the meatball flag.