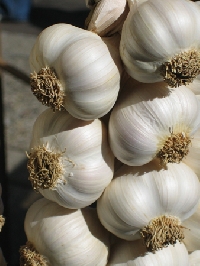 Garlic’s colorful history and its many health-related benefits

Although it is not certain exactly when it was discovered, garlic was probably first dispersed by nomads on the steppes of central Asia several thousand years ago. The benefits of garlic have long been known, and as early as the 8th century BC, garlic was growing in the garden of Babylon. Chinese scholars spoke of it as far back as 3000 BC and garlic was so prized in ceremony and ritual that lambs offered for sacrifice were seasoned with garlic to make them more pleasing to the gods.

Long considered an ?herbal wonder drug,? garlic down through the centuries has been associated with many European legends; some involving vampires and others concerning illnesses such as Bubonic Plague. In ancient Greece, Hippocrates, the father of modern medicine, used garlic for treating colds, infections, wounds and intestinal disorders. Roman legionnaires attributed their courage and stamina to garlic and took it with them as they conquered the world.

Ancient Egyptians worshipped garlic, and according to ancient papyri, during the era of Egypt?s great pharaohs, garlic served as food, antioxidant and sacrifice. Unfaithful Egyptian husbands relied on garlic cloves to chew on as they returned home from visiting their mistresses. Impregnating their entire bodies with the odor insured that a jealous wife would be unable to detect another woman?s perfume.

What are some of the benefits of garlic?

Generally speaking, the benefits of garlic in terms of its medicinal properties are strongest when it is raw and crushed or very finely chopped. Cooked prepared garlic is less powerful, but still reputedly of benefit to the cardiovascular system. Garlic cloves cooked whole, however, have very little medicinal value although their milder taste is more palatable to many. Here are some of the benefits of garlic that have proved tried and true since ancient times.

1- Garlic as a natural antibiotic

Raw, crushed garlic is a powerful natural antibiotic although it is broad-spectrum in nature and not effective in targeting specific areas. The problem with most antibiotics is that bacteria develop a resistance to them; this is not the case with garlic. One clove a day will improve health, and two to three cloves will help prevent a cold. To insure optimum results, when adding garlic to any dish, wait until the last 10 minutes of cooking time to add the garlic.

2- Garlic as antioxidant and aging inhibitor

Garlic?s natural ingredient, allicin, naturally increases two anti-oxidant enzymes in the blood (atalase and glutathione peroxidase). It also slows the liver?s aging process by inhibiting lipid peroxidation. Too much garlic however, can irritate the digestive system.

This particular benefit of garlic was first realized back in the early 19th century when English priests caught an infectious fever. The French priests, who ate garlic everyday, didn?t. Garlic has 1% of the potency of penicillin and can hold its own against a number of bacteria such as Listeria, Salmonella, E. coli, Cryptococcal meningitis, Candida albican and Staphylococcus.

Clinical trials, which were published in The Journal of Hypertension, revealed that the blood pressure of volunteers was reduced 1?5% after taking garlic supplements. Even this small amount can make a big difference in reducing the chance of a stroke by 30-40% and heart disease by 20-25%.

The benefits of garlic are numerous and varied, but they should always be seen as part of a healthy diet and lifestyle, not an alternative to one. Garlic supplements can be dangerous as they may interact with certain drugs such as anticoagulants. Although the benefits of garlic can never replace a healthy balanced diet, they can certainly enhance one tremendously.