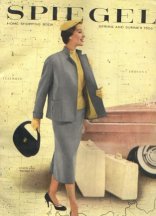 Catalog apparel first appeared in Spiegel in 1912, new territory for the company

The origins of the Spiegel catalog date back to 1888, before the mail order system even existed. An extension of a successful home furnishings business, the Spiegel catalog was mostly a family owned business during the first 100 years of its operation.

How the Spiegel Catalog Began

In 1865, Joseph Spiegel founded J. Spiegel and Company, a small home furnishings store located in Chicago?s loop. According to the Spiegel website, the small furniture store was successful until it was destroyed by the Great Chicago Fire on 1871, which destroyed much of downtown Chicago. Three years later, by 1874, the store was rebuilt and once again prosperous.

Joseph Spiegel’s sons, Modie and Sidney, joined the business in 1885. By 1888, Spiegel?s first catalogs were issued to prospective female customers living outside of Chicago. Since mail order didn?t yet exist, the purpose of the catalog was to draw women to the store.

In 1892, the company went bankrupt due to debt and slow paying customers, but they bounced back a year later. In 1893, the family company rebranded itself as Spiegel House Furnishings Company of Chicago and the slogan ?We Trust the People?. The slogan was in reference to the company?s new approach to financing; they sold on credit and offered installment plans so people could pay for their furniture over a set period of time.

With an emphasis of credit merchandising, Spiegel began further expansion around the early 1900s, opening branch stores in Chicago?s South Side.

The Spiegel catalog began to grow its own legs after Joseph?s third son, Arthur Spiegel, entered the business in 1903 with plans to develop the mail order operations. In 1905, Spiegel revised its slogan to ?We Trust the People ? Everywhere!? as they began to offer credit to customers through the mail.

When the Spiegel?s mail order sales soared to $1 million in 1906, a new company was formed, Spiegel, May, Stern and Company, with Arthur Spiegel as the president.

Spiegel began diversifying its product by offering catalog apparel in 1912. After a few poor relationships with clothing manufacturers, Spiegel began to offer its own line of ladies apparel, the ?Martha Lane Adams? line.

Though the last Spiegel furniture store closed its doors in 1932, the company?s sales flourished in the later 1930s as the company responded to the Great Depression by marketing easy credit with a ?No Charge Credit Policy?. Around 1938, Spiegel catalog began to target a higher income bracket by introducing quality national brands to its apparel, accessories and home furnishings catalogs.

After a sales slump in the 1940s, in which the company operated a few retail outlets, the company rejuvenated the Spiegel catalog with another liberal financing policy and began to build its customer list.

In 1965, Spiegel was sold to a finance company and began to face pressure from large discount stores like Kmart. By the late 1970s, Spiegel began to change its image to a ?fine department store in print?. Low budget items were replaced by upscale catalog apparel and accessories. Designer labels began appearing in Spiegel?s catalog by the 1980s.

In 1982, Spiegel was sold to the Otto family, owners of Ott-Versand GmbH, one of the largest catalog retailers in the world, today. In the 1990s, the Spiegel catalog was repositioned as the premier catalog for fashionable career women. Today, Spiegel catalog continues to offer catalog apparel, home furnishings and fashion accessories, and they distribute other catalogs including Newport News and Eddie Bauer.

The history of Spiegel catalog shows how a small family owned furniture store grew to be one of the country’s leading catalog retailers with specialty stores throughout the country.