What is the history of the Corvette? 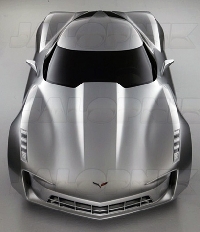 The history of the Corvette (sometimes known as ‘Vette) dates back to 1953 and General Motors? chief designer, Harley Earl. The name, Corvette, was dubbed by Myron Scott after the light-weight warship of the same name. The National Corvette Museum and annual National Corvette Homecoming, located in Bowling Green, Kentucky celebrate the car’s history.

The first Corvette was only intended to be part of GM’s Motorama exhibit at the 1953 New York Auto Show but it was so popular that six months later in June of 1953, it went into production in Flint, Michigan where the car and its many Corvette parts and accessories have been made ever since.

Before you continue reading about the What is the history of the Corvette? there is a special announcement we would like to share with you. Catalogs.com has negotiated special medicare rates for our vibrant community of seniors. If you are over the age of 60, you can head over to our Seniors Health Section which is full of information about medicare. All you need is your zip code and a few minutes of your time to potentially save 100s of dollars on your medicare bills.

What is the history of corvette as a sports car?

The 1953 corvette had a beautiful fiberglass outer body but it was no sports car. The fiberglass, which was considered revolutionary, was selected in part because of steel quotas left over from the war. Suspension was primitive and the rear was supported by leaf springs. The 150-horsepower and two-speed transmission were sadly lacking for sports cars, and on top of that was the cost of $3,498.

With limited production due to the fact that they were all hand built and assembled, the 1953 corvette, with a total of only 300 units produced, is the rarest and one of the most sought after corvette model years.

The ’58 corvette was a big hit and Chevy built 9,168 examples. For the first time, GM made a profit with the corvette. The big engine for 1962 was news, as the small-block V8 now grew to 327 cubic inches. The base four-barrel engine now claimed 250 horsepower with higher output versions available in both 300-and 340-horsepower.

The public fell in love with the Sting Ray, buying 10,594 coupes and 10,919 convertibles. Designed by Bill Mitchell and Larry Shinoda, the new body with high waistline and sharply creased fenders became the Sting Ray or as it is also sometimes known, the 1963 Corvette roadster fastback coupe. This year was distinctive in the history of corvette as it was also marked by the introduction of the distinctive split rear window and non-functional hood vents as well as an independent rear suspension.

The third-generation corvette styling was flamboyant in its overall shape but restrained in its details. Although never as popular as the preceding generation, it is still a car that commands attention wherever it goes. The fenders seem to oddly burst over the tires and the pop-up headlights render a sleek appearance. Most unique however, were the two removable roof panels, which were known as the first ?T-tops.? This corvette was a hit, with Chevy selling 9,936 coupes at the starting price of $4,663 and 18,630 convertibles starting at $4,347. That was yet another record for the company.

Although 43 models were built, none were ever sold to the public and only one survives today. In March of 1983, Chevrolet began selling the 1984 corvette and it was the most dramatically different model since the ’63 Sting Ray. Gone were the old coupe’s T-tops in favor of a single fiberglass section that could be removed using a wrench, and hideaway headlights were now single square units on rotating mounts. The clamshell hood was a turnoff to insurance companies who were forced to cover its enormous replacement costs.

The fifth-generation corvette was the most wholly new model since 1953. The entire concept of how the car was built changed. Instead of bolting the transmission directly behind the engine, the 1997 version split the transmission off and placed it in the back of the car between the rear wheels where its weight offset that of the front engine. The engine was completely new as was the frame. The clamshell hood was gone in favor of a less expensive variation.

Chevrolet acknowledged the 50th anniversary of the corvette for 2003 with a 50th Anniversary Edition that was as available either as an LS1-powered hatchback coupe or convertible. With the presentation of the 2004 model, everyone was fully aware that the swan song for the corvette was drawing near.

Chevrolet’s engineers decided to take the best aspects of the former models and build on them. The idea was to create a car that does more things well than performance cars at a cost of two or three times the price. The chief goal was to improve its refinement and performance while addressing every notable imperfection of previous generations. The result is a classy car with top-notch ergonomics.

The history of corvette is engrossing, complex and even more highly detailed than depicted here. Know and appreciate corvettes and other collectible antique cars as many of them are beautiful and very rewarding to own and operate.