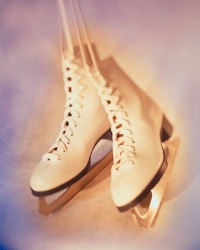 Ice skating began as transportation and transformed into an Olympic event.

Figure skating has become a sports phenomenon, propelled in popularity largely through the controversy of the 1994 winter Olympics. The Kerrigan-Harding feud captured the attention of spectators across the world and catapulted the previously quiet sport into a must see event.

Although people have been ice skating for centuries, using wooden skates as a means of transportation across frozen waters, the sport in its current form has only been in existence since the mid-19th century. Figure skating gets its name from the ‘figure eight’ shapes skaters made on the surface of the ice in competition.

A New Kind of Skating

In the mid 1860s Jack Haines, often referred to as the ‘father of figure skating,’ coined a new style of skating. This new style included dancing to music and expressive techniques and became hugely popular in Europe, although the Americans did not adopt it until much later.

The International Skating Union was founded in 1892 and the first European Championships were held in 1891. The first World Championship was held in Russia in 1896. The International Skating Union (or ISU) is an important regulatory body, overseeing details such as rules and performance standards. It is interesting to note that at the time of the first World Championship, only men competed in the events with the first woman, Madge Syers, who entered the championships in 1902. She took second place, after which the skating union banned women from competing against the men and formed a ‘women only’ competition in Switzerland in 1906. In 1914 an international skating competition was held in Connecticut, formally introducing the sport to the U.S and Canada.

After World War I

After a brief interruption in the sport due to World War I, figure skating regained popularity in the 1920s when a Norwegian woman named Sonja Henie brought new spotlight to the sport by dominating in competitions and performing on skating tours. Henie was a three-time Olympic champion and won the World Championship a record 10 times and the European Championship six times. The first female skater to don the now traditional skating outfit of short skirt and skating boots, Henie played a large role in turning the sport into the more exciting version known today.

After World War II, many of the rinks in Europe were destroyed and it was during this time that the Canadians and Americans began to make themselves known on the ice. The United States Figure Skating Association was formed in 1921. An American, Dick Button, was the first male skater to perform the double axel and triple loop jumps. He went on to win Gold medals in the 1948 and 1952 Olympics.

On February 15, 1961, the entire U.S skating team and their coaches were killed when their airplane, Flight 548, crashed over Brussels in Belgium while en route to the World Championships in Prague. This tragedy resulted in the American figure skating team having to be rebuilt. With their American competitors struggling to regroup, the Soviet Union rose up to become formidable competitors in the sport, especially in the ice dancing and pairs categories. In fact, throughout the history of figure skating, at every winter Olympics event from 1964 to the present day, a Soviet or Russian pair has won gold, making them one of the sport’s most formidable competitors and spectator favorites.

Today, the sport of figure skating is one of the most watched and exciting events in the Olympics. Its popularity is increasing across the globe, bringing to international audiences a greater appreciation of the history of figure skating.