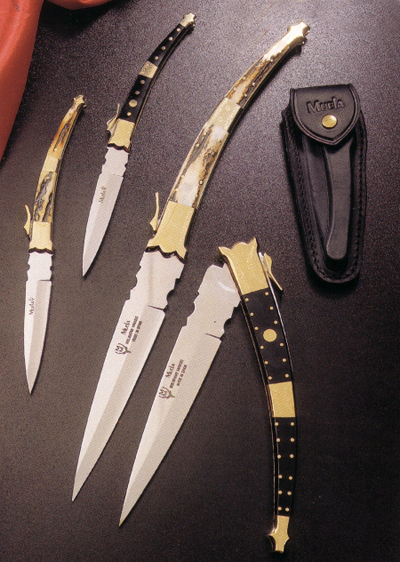 The history of knives is a long one, dating back to the Stone Age. Knives are, in fact, among the oldest of tools utilized by early man. The earliest types of knives were made by a process known as knapping (percussive flaking) of rock, particularly harder varieties such as obsidian and flint.
The original function of knives has remained unchanged down through the centuries, as sharp stones or pieces of wood performed the same cutting, piercing and carving tasks as that of any modern knife or pocketknife.

The invention of metal and advances in metallurgy revolutionized the art of tool making and as civilization progressed through the Bronze and Iron Ages, so did the way knives were made. Stone, wood, and bone blades eventually gave way to copper, bronze, iron, and eventually steel.

The first metal knives were copper, symmetrical double-edged daggers, which were replicas of daggers from earlier periods. In Europe, the first single edged knives appeared during the Middle Bronze Age.

Before you continue reading about the History of knives there is a special announcement we would like to share with you. Catalogs.com has negotiated special medicare rates for our vibrant community of seniors. If you are over the age of 60, you can head over to our Seniors Health Section which is full of information about medicare. All you need is your zip code and a few minutes of your time to potentially save 100s of dollars on your medicare bills.

Knives of all kinds have always been used as weapons, tools and eating utensils. In early cultures, owning knives was a source of personal pride and they were often decorated, some with feathers and during later periods embedded with jewels and designs of gold and silver. Some knives were exclusively meant for men and some for women; while others were for either sex.
The primary change in the history of knives down through the centuries has been the development of the materials from which they are made, which today includes: alloy tool steels, carbon fiber, ceramics, and titanium.

As man evolved, so did the function of knives and they were eventually adopted for use in the kitchen and at dining tables. They never, however, lost their power as weapons in the form of swords. The warrior?s sword is a prevalent symbol of glory and bravery throughout the ancient world, and every ruler of any kingdom cherished his sword and proudly passed it on, like family silver, to future generations.

The history of knives reveals that every culture had its own unique version of the knife, which was either a fixed-blade or folding blade, with patterns and styles as varied as the people who used them. In some instances, the knife was revered as an icon of spiritual and religious significance.

Has the history of knives really changed down through the centuries?

Although modern knives come in many forms, there are still two broad types: fixed blade knives and folding, or pocket, knives. A fixed blade knife, also known as a sheath knife, and is considered the stronger of the two due to the tang, the extension of the blade into the handle, and lack of moving parts. A folding knife connects the blade to the handle via a pivot, which allows the blade to fold into the handle. Typically, folding knives have a locking mechanism and there are different types, each favored for perceived strength (lock safety), legality, and ease of use.

The knife blade can be manufactured from a variety of materials and the edge can be plain or serrated or a combination of both. Carbon steel, an alloy of iron and carbon, can be very sharp, but it is vulnerable to rust and stains. Stainless steel does not have quite the same sharp edge, but is highly resistant to corrosion. High carbon stainless steel is intended to incorporate the best qualities of both types of steel. These blades do not discolor or stain, and maintain a sharp edge.

One prominent feature on many folding knives is the mechanism by which it opens. The nail nick is traditional on pocket knives and Swiss Army Knives, while modern folding knives often employ a stud, hole, disk, or flipper located on the blade, all which permit the user to open the knife with one hand.

The history of knives is the story of our original carbon footprint, so to speak, as it represents the arduous course of mankind and how he has endured as a species. It is a rich and colorful saga, rife with both cultural and technological growth on the one hand, and paradoxically, beliefs that in some instances have changed little since the dawn of humanity.