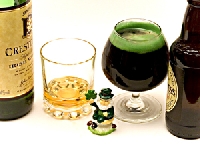 St. Patrick’s Day is a holiday rich with history

St. Patrick was born into a wealthy family in Britain.  He was taken prisoner by Irish raiders who attacked his family’s estate.  He was taken to Ireland and held in captivity.  Patrick escaped after being held prisoner for more than six years.  It’s believed he heard a voice which he believed to be the voice of God telling him to leave Ireland.  He went to Britain where it’s believed he had a dream of an angel telling him to go back to Ireland as a missionary.  He studied and became an ordained priest.  He eventually returned to Ireland to minister to the Christians and convert Irish who were not practicing Christians.

Before you continue reading about the Discover the history of St. Patrick’s Day there is a special announcement we would like to share with you. Catalogs.com has negotiated special medicare rates for our vibrant community of seniors. If you are over the age of 60, you can head over to our Seniors Health Section which is full of information about medicare. All you need is your zip code and a few minutes of your time to potentially save 100s of dollars on your medicare bills.

Patrick was familiar with the Irish language and culture.  He used tradition ritual in his lessons and did not attempt to erase the beliefs of the Irish.  Bonfires were used to celebrate Easter because the Irish honored their gods with fire.  He took the sun and superimposed it onto the Christian cross, thus creating the Celtic cross.  The symbol would seem more natural to the Irish.  After all, most the Irish practiced a nature-based pagan religion.  For more information on St. Patrick, visit a Catholic book store or store specializing in Irish merchandise and folklore.

The history of St. Patrick’s Day

Christians all over the world commemorate St. Patrick on March 17, which is the day St. Patrick died.  Many people believed that he banished snakes from Ireland.  However, after some investigation into the history of St. Patrick’s Day this belief was proven to be false.  Stories about St. Patrick were exaggerated throughout the years.

The history of St. Patrick’s Day includes many myths and legends.  The most popular is that of leprechauns.  Said to be a fairies that stand 2 feet tall and have the look of an old man, they are not friendly creatures.  They are dressed like shoemakers and make shoes to pass time.  They have a pot of gold which they protect.  If you track one down, they are supposed to reveal the whereabouts of the pot of gold.  Do not take your eyes off of a leprechaun.  If he disappears so does your chance of getting your hands on the pot of gold!

The history of St. Patrick’s Day includes people wearing green in honor of Ireland.  The shamrock and three leaf clover are also symbols of St. Patrick’s Day holiday.  People will dance and sing Irish tunes.  It’s a day to celebrate with a party and observe St. Patrick as the patron saint of Ireland.  Remember to watch out for those leprechauns.  They will not give up their pot of gold without a fight.