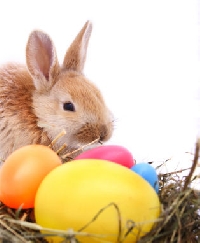 Easter is a Christian holiday commemorating the Resurrection of Jesus Christ, who, according to the New Testament, rose from the grave three days after his crucifixion, with the promise of eternal life.

However, Easter also has a non-religious history as one of the earliest pagan festivals celebrated in Europe by the ancient Saxons. Long before the introduction of Christianity, ancient pagans celebrated the arrival of springtime with festivals recognizing a Goddess of Fertility named Eostre.

As Spring weather arrived, pagans celebrated the Vernal Equinox and it was believed that the goddess Eostre replenished the land with renewal, birth and rebirth and fertility. In fact, according to the early Germanic calendar of the Anglo Saxon pagans, the month of April was referred to as Eostre-monath, or Easter month.

The history of the Easter bunny actually dates back to the early pagan festivals celebrated in Europe. In fact, Easter bunnies, Easter eggs and Spring decorations, all of which have become standard tokens of the holy Easter holiday, are some of the most ancient symbols of fertility associated with the Goddess Eostre.

Prehistoric peoples were aware that birds began laying eggs in the spring, while rabbits and hares gave birth to spring litters. Eggs, as well as pies or stews made from rabbit meat, were traditional dishes during pagan Eostre festivals. The history of the Easter bunny arose from these early festivals.

According to one pagan folklore story, the Goddess Eostre cast a hare into the Heavens, creating the constellation we know today as Lepus the Hare, located just below the constellation of the hunter Orion. In the ancient world, the rabbit?s foot was also believed to have special powers of fertility, even aiding in the reproductive prowess of humans. These ancient peoples first carried lucky rabbit foot charms as talismans associated with the Easter holiday.

Today, those curious about the history of the Easter bunny may be surprised to learn of the ancient, pagan roots associated with this contemporary holiday mascot, commercialized today as a friendly, fuzzy, cartoon-like creature that delivers Easter baskets to children, or hides colorful Easter eggs.

The first reference to an ?Easter bunny? appears in Germanic writings from the 1600s. The history of the Easter bunny in association with chocolate or candy began in Germany in the early 1800s, when confections shaped as rabbits were made of pastry, sugar and chocolate.

It is believed that the Easter bunny was first introduced to America by German immigrants who settled in the Pennsylvania Dutch area during the 1700s. The children of these early German settlers traditionally built colorful nests out of caps and bonnets for the “O_ster Haws_e” (a phonetic pronunciation of the early Saxon term for Eostre Hares) to fill with colored eggs and edible treats. This fanciful springtime tradition was similar in nature to the arrival of Kris Kringle at Christmas time.