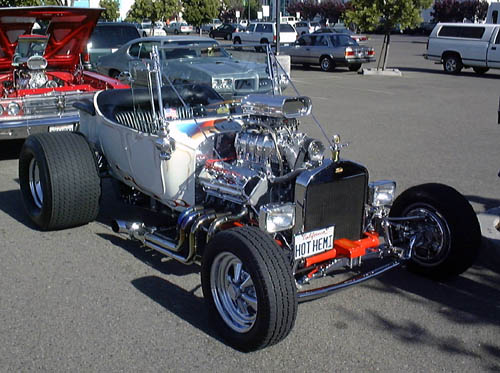 Hot rodders are a loyal bunch of car enthusiasts. Many share a common dream to build or at least ride in the ultimate T-bucket. If you?ve never seen one for yourself at a car show or zipping down a back road, T-buckets are some of the most unique cars ever. Posters and pictures simply don?t capture what it is that makes t-buckets the object of the affections of a hot rodder.

T buckets take their name from the first hot rods that appeared in the early 1920s. At the time, the Ford Model T was the most affordable car a family could buy, so many families did. The same black cars going the same speed filled the roads and inspired car enthusiasts to tinker and make theirs faster, more unique than other Model Ts.

The spirit of competition and the challenge to improve the Model T?s performance fueled the embers of car modification and hot rodder culture.

The first T-buckets were modified for speed. T-bucket engines were rebuilt for power and cars were stripped of any unnecessary parts to reduce weight: bumpers, fenders and hoods were removed. These cars may not have looked like much parked on the side of the road with their engines exposed wind shields removed and rough edges, but they were true beauties to hot rodders. T-buckets were cool cars in their purest form, and they didn’t need bells and whistles to outperform other Model Ts on the road.

T-buckets are just one type of the many kinds of hot rod cars. As the last Model T was manufactured in 1927, it?s rare to see a real T-bucket running today.

As the hot rodder tradition goes, first you fall in love with the T-bucket, and then your hands itch to build and modify one of your own. Modern T-buckets are often built from kits with component parts that are replicas of the original Model T. Most of these kits are based on the 1923 Model T.

For many hot rodders, the ultimate T-bucket is the original no-replicas-will-do modified Model Ford T. For others, it?s the one they build with their own hands. Or, as the tag line for TBucket.com simply puts it ?Real hot rods don?t have fenders.?

Modern T-buckets do have a few features in common. One humongous shiny engine steals the show of this small, lightweight car – you?ll often see over-sized rear tires installed to handle the engine?s force. Front wheels are small in reference to the original T-bucket?s drag racing glory, though most are only for street and show.

Ask hot rodders what their favorite car is and many will tell you it?s a roadster with a capital ?T?.