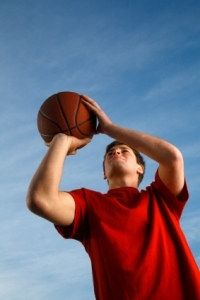 Discover how basketball started and its history in a nutshell

Basketball is one of America’s favorite sports, played in high school gyms and arenas in every state across the country. From the Globetrotters to the NBA, people everywhere have fallen in love with basketball, making it one of the most popular sports in America and across the globe.

Basketball was invented in Canada by Almonte Ontario native Dr. James Naismith, which is considered to be how basketball started. After attending McGill University, Naismith became the athletic director and in 1891, he began working as a physical education instructor at the YMCA Training School in Springfield, Massachusetts. Faced with the responsibility of creating a game the students could play indoors during the long winters, basketball was born. The first games of basketball involved two teams of nine and the object was to gain possession of, and throw a soccer ball into one of two peach baskets affixed on a wall ten feet above the floor.

Basketball Expands into the Present

The YMCA introduced the sport in many nations as early as 1893. Around the same time, the wooden peach baskets used as goals became obsolete and replaced with iron hoops and hammock style baskets. It was another decade however, until someone thought to cut out the bottoms of the baskets. This allowed the ball to fall through to the floor, which resulted in less interrupted play. Teams went from nine players to five and the ball changed from a soccer ball to a ball made especially for basketball.

The first women’s collegiate game was in 1896 at San Francisco’s Page Street Armoury between Stanford and Cal U. The game did not resemble basketball as we know it today; in fact, the universities stressed that they expected lady like behavior from their players. Even taking the ball from another player was against the rules. Stanford won 2-1.

It wasn’t until 1934 that the first college basketball games were played in New York City’s Madison Square Gardens. Two years later, the sport made its debut at the 1936 Berlin Olympics. This was such a huge event that 74-year-old James Naismith traveled across the Atlantic to be there.

Basketball history continued in 1946 when the Basketball Association of America (BAA) formed and in 1949 joined with the National Basketball League to form the NBA. This union sought to protect players and encourage a more organized game. The only two teams left from this original group, from their original cities, are the Boston Celtics and the New York Knicks.

The first NBA game happened on November 1, 1946 in Toronto Canada. The New York Knickerbockers defeated the Toronto Huskies 68-66 at Maple Leaf Gardens. By the 1950s basketball had become a major college sport. In 1959, basketball history continued when James Naismith was inducted into the basketball hall of fame, which incidentally is called the Naismith Memorial Hall of Fame.

Today, there are 30 teams in the NBA, all of which cater to America’s love of basketball.