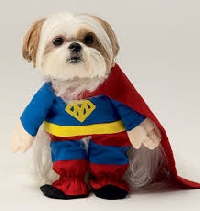 Many pet owners get a kick out of dressing their furry buddies up, particularly around Halloween. Not nearly as many pets enjoy the confines of a superhero cape or mummy wrap. Fortunately, there are simple ways around this conundrum.

This guide will show you how to get your dog to wear a costume and like it. He may even trot in a pet parade.

Keeping the dog costume packed away until the big day will make it seem strange and probably uncomfortable to him. Lay it down by where he naps. At first he’ll probably sniff it, walk around it then leave it alone. But soon it’ll be familiar to him, maybe even something he likes.

Prepare her for what’s ahead

Train your dog to wear a costume a few weeks before the big event. Between trick-or-treating, carving pumpkins and catching parades, things get a little hectic. Get her comfortable with the outfit by dressing her in it a few times during the days leading up to the event. Practice putting the outfit on one piece at a time.

Start by draping the material over her back. Later, fasten it and gradually extend the amount of time she keeps it on. When you fasten it on for the first time, distract her with a favorite toy. This also breaks in the material so it’ll be less stiff when she wears the dog costume on Halloween.

As you already know, dogs are easier to work with when they’re relaxed and happy. Take a long walk before trying on the costume or have a good game of fetch. If he is less energetic, things will go better.

Give him one of his favorite treats right before you put the costume on. It’ll only take a few times for him to associate this reward with wearing the costume. He’ll see it as something positive rather than something strange to resist.

The main thing to keep in mind when wondering how to get your dog to wear a costume is simplicity. Few if any props are the path of least resistance. Feel the fabric to make sure it won’t itch and check the fit to see that it’ll allow free range of movement.

Dogs that resist fabric completely may be a better match for elf ears or a lion’s mane. A jester collar fits around their existing one so he may not even notice he’s wearing it.

Win him over with persistent patience

Try not to get frustrated when he resists the elaborate number you splurged on. Give him time and praise him when he keeps it on. Be patient and try to make these mini practices fun so he’ll stop fighting you.

The first year you practice how to get your dog to wear a costume will be the most challenging. You’re basically training him to wear clothes, which is something dogs don’t naturally do. Remember that putting on a bulky outfit and hat is bound to feel strange to them.

Note which pieces he has the biggest problem with. For instance, some dogs refuse to wear footwear. Ease him into the idea by starting with small child’s socks. Alternatively you can remove the top part of the boot from the sole so they cover the top of the paw without impacting how he walks.

Do yourself a favor and choose something minimal this first year. Save the full body Godzilla outfit for next year. Dog bandanas or temporary fur dye are easy options if your heart is set on bringing a stubborn pup to the costume parade. A few streaks of green or orange down the back will do the trick ? no need to turn his whole body blue.

Keep practicing. Put him in a dog tee shirt occasionally and by the holidays he’ll be ready to join the other goblins or look dashing in a Santa hat.