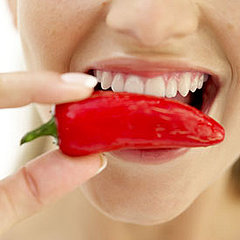 Some people adore spicy foods while others avoid them like the plague. Is spicy food good for you and should you be eating more of it?

Some argue that eating hot foods aggravates stomach problems and makes ulcers worse. This is not true. In fact, if taking anti-inflammatory medications for pain, eating a hot chili pepper may safeguard the lining of the stomach and thwart the damage that can be done to the stomach when taking this type of medicine.

When taking anti-inflammatory agents, including aspirin, this can lead to bleeding in the stomach. Hot chilies lower the gastric output acid as well as reduce stomach bleeding.

Scientists believe that hot chilies may lower the risk of heart disease, enhance metabolism, prevent diabetes and maybe even cancer. How can that be?

Spicy peppers contain lots of vitamins including A and C as well as calcium and capsaicin. Capsaicin is what causes the food to burn but it is also believed to destroy pancreatic and lung cancer cells without hurting the surrounding good cells.

Other studies have shown that including fiery foods in your diet may prevent cholesterol from building up in the blood as well as lower insulin requirements.

When a person applies a pain relief cream to the skin that contains capsaicin this makes the substance in the brain that tells the body to signal pain to back off.

Is has also been found that eating chili peppers improves a person?s mood because the zesty food make the body produce more endorphins, which are the feel good chemicals or natural opiates that make a person feel better as well as lessen any pain they are experiencing.

Curry is a term for foods that originate in Pakistani, Indian, Thai and other southwest Asian cuisines that contain a mixture of herbs and spices including chilies.

Alzheimer?s patients experience the growth of dangerous plague in their brain. When eating curcumin regularly this is believed to slow the progress of this horrible disease because the person is more capable of digesting plague-creating proteins after eating curcumin.

Eating curcumin was discovered to effectively lower oxidative damage, synaptic maker loss, cognitive deficits and amyloid deposition, all of which can stop the progression of Alzheimer?s or prevent it all together. Curcumin is found in the Indian spice turmeric, which is a member of the ginger family.

Those suffering from arthritis may find relief when eating foods that contain turmeric because it reduces the destruction bone caused by arthritis as well as lessens joint inflammation.

Do you have a cold? Eat some hot peppers and this makes you sweat, which lessens the discomfort you are experiencing. Spicy foods open up clogged nasal passages so you can breathe easier.

THE BATTLE OF THE BULGE

Are you trying to lose weight? Eating spicy foods can speed up metabolism, which helps the body burn calories quicker. It is also believed that capsaicin hastens the death of fat cells that are immature as well as suppress appetite, which leads to eating less food and eating less protein and fat. Capsaicin is thought to reduce the number of fat cells in a body.

Hot peppers can come to the rescue of someone who has asthma, sinusitis, chronic bronchitis and emphysema because the peppers are an expectorant and help the person breathe easier.

On the flip side, there is some evidence that those who eat between nine and two dozen hot peppers a day have a higher risk of getting stomach cancer so don?t overdo it.