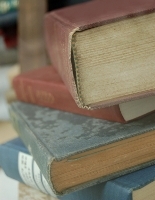 Learn about the life and works of James Joyce.

One of the most influential fiction writers of the 20th century, James Joyce (1882-1941) is known for four works: “Dubliners” (1914), “Portrait of an Artist as a Young Man” (1916), “Ulysses” (1922) and “Finnegan’s Wake” (1939). The most socially controversial “Ulysses” (it was banned, called obscene, and burned) is considered the most important. “Finnegan’s Wake” is considered by many to be a failure, or too obscure to know what it is about.
Life of James Joyce

Joyce was born an Irish Catholic in Dublin, Ireland, but spent most of his adult life in exile in various cities in Europe. Nevertheless, he could not or would not escape its influence.

His personal life was not controversial or extraordinary. He spent his formative years in Dublin but moved to Europe and remained in different cities for a period of time before settling in Paris. His network of friends included Ezra Pound, Samuel Becket, Harriet Shaw Weaver, Frank Budgen and Ettore Shmitz ? all of these were influential in either publishing his works or in allowing him to work exclusively in his writing.

The short story collection “Dubliners” is about the stagnation and paralysis of Dublin society. His experiences in Ireland constitute an essential element of his writings, and provide all of the settings for his fiction and much of their subject matter.
“A Portrait of the Artist as a Young Man” (1916)

Joyce started a novel called “Stephen Hero.” But he rewrote it and it became “A Portrait of the Artist as a Young Man.” It is a biographical coming-of-age novel which depicts a young man’s gradual growth towards maturity and self-consciousness. It was well received.
“Ulysses” (1922)

Many critics consider 1922 a key year in the history of English-language literary modernism, with the appearance of both Ulysses and T. S. Eliot’s poem, “The Waste Land.” The action of the novel, which takes place in a single day, June 16, 1904, sets the characters and incidents of the odyssey of Homer. The book consists of 18 chapters; each covers about an hour of the day, beginning around 8 a.m. and ending sometime after 2 a.m. the following morning. The 18 chapters employ their own literary style. They also refer to a specific episode in Homer’s odyssey and have a specific color, art or science and bodily organ associated with it. Joyce employs a variety of literary techniques: stream of consciousness, parody and jokes to present his characters.
~
“Finnegan’s Wake” (1939)

In some ways this is an extension of Ulysses. If Ulysses is a day in the life of a city, then Wake is a night and partakes of the logic of dreams. And some critics take the night to be June 17, 1904, the night following Ulysses. What makes the book controversial is that it is full of word play, which makes it difficult to read. For example:

But is there a plot? Some say there is, and it involves multiple layers. At one layer you have a set of characters: Mr. Porter, his wife Ann, their daughter, and their two sons, Kevin and Jerry. Mr. Porter is dreaming at night, and throughout the book you hear the tapping of a branch at his window. But the plot goes in different directions so that the dream logic becomes the dream plot.
The View of History: Cycles

Joyce also has a view of history influenced by Giambattista Vico. Vico propounded a cyclical view of history, in which civilizations rise from chaos, passed into a theocratic, then aristocratic, and finally into democratic phases, but then lapses back into chaos. In “Finnegan’s Wake,” the influence of Vico’s cyclical theory of history is to be found in the opening and closing words of the book.

“Finnegan’s Wake” begins with the words:

“riverrun, past Eve and Adam’s, from swerve of shore to bend of bay, brings us by a commodius vicus of recirculation back to Howth Castle and Environs.”

But it ends on the last page with:

“A way a lone a last a loved a long the”

The book ends with the beginning of a sentence and begins with the end of the same sentence, turning the book into one great cycle.