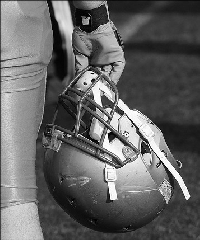 A look at football in the SEC conference

Even though I can be a girly girl at times, nothing gets my blood pumping more than college football season. I’ve always believed that college football was more entertaining than the NFL. College kids play hard because they’re trying to prove something. NFL players, however, drive away from the game in expensive cars to multi-million dollar homes whether they win or lose. I was born and raised in Georgia, the epicenter of SEC conference football. Growing up, I became a devout fan of the hard hitting teams of the Southeast. During the fall and early winter months, while my girlfriends are out shopping their Saturday afternoons away, I sit in front of my television screaming for first downs while wearing my favorite team jersey and matching team sneakers. (Oh, yes! I am that big a fan of football!) There are several college football conferences in the country, but the south is where football is not just a sport, but a way of life.

By watching just one game, it’s clear to see that the players aren’t the only ones pouring their heart and soul into the game. SEC conference football fans are among the most devoted and passionate in all of collegiate sports. From tailgating for hours before game time to dedicating whole rooms in their house to their beloved teams, SEC fans give their all to their schools. Since its establishment in 1932, SEC conference football has been steeped in proud traditions and bitter rivalries that run deeper than the Mississippi River.

The SEC is largely considered to be the toughest of all 6 of the BCS conferences. The SEC currently consists of 12 schools that are divided into two divisions: East and West. Eleven of the twelve institutions are public universities, with the only private school being Vanderbilt University in Nashville, Tennessee. The other schools that make up the SEC Conference are:

There are a few schools in the SEC that have rivalries that cross conference lines, such as the annual Georgia-Georgia Tech game. Georgia Tech left the SEC in 1964 and is currently a member of the ACC. These two schools are just over an hour away from each other, which is why their rivalry is considered to be a cross town turf war. Throughout my years of watching college football, I’ve found that the most bitter rivalries in all of college football are within the SEC. My personal favorite happens to be the infamous Georgia-Florida rivalry. The game takes place right around Halloween every year, and although it’s affectionately referred to as “the world’s largest outdoor cocktail party”, once the players take the field, the fun is over and the clash of the SEC conference football titans begins.

Although I do enjoy watching the clean cut teams of the Big Ten and the sun kissed players of the Pac-10, no one beats the boys from the south.