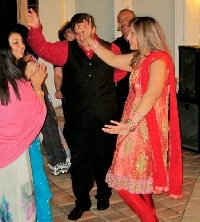 Whether you know it or not, you’ve probably already participated in some form of social dance. Although there are some kinds of social dance that require training, in this kind of dance, sociability is the main focus of the dancing.

If you’ve ever been to a sweet sixteen, Bar mitzvah, or homecoming dance, then you remember at least one awkward partnered dance. But, social dancing isn’t just for high school kids, and, fret not, it’s going to be a lot more fun than your first slow dance.

Tarantella is an Italian folk dance. Tarantella means “little spider.” It can be traced back to the Middle Ages. Tarantella dance is light, teasing, flirtatious and has quick steps.

Contra dance is especially popular in North America, but it can be found all around the world. This kind of dance is a partnered folk dance in which couples dance in two facing lines.

English country dance is a type of folk dance that has been around since the 16th century! On the other hand, House Dance, primarily danced to techno-y house music, is far more modern. House dance is improvisational, fast, and fluid.

Square dance is also called Country dance. In Square Dance, four couples face one another in a square. A caller shouts out the steps and movements of the dance. Nineteen U.S. states have square dance as the official state dance.

Street dance is formally known as vernacular dance. Street dance varies from traditional to modern electronic styles. Street dance is danced outside of a dance studio and in any available open space such as parks, raves, and school yards.

Swing dance developed at the same time as swing style jazz music during the 1920s, 1930s, and 1940s. Swing dance is a lively dance style in which couples swing, spin, and jump together.

Tango originated in Rio De La Plata. It developed in response to many cultural elements. Tango has since become popular in the West, and has been featured in numerous films such as Moulin Rouge (2001) and Shall We Dance (2004).

As you have probably noticed, there are forms of folk dance originating in every corner of the world. Even more interesting though, is the fact that all of these different kinds of dances have the same basic purpose: to dance.

Dancing is part of our human culture. In our hectic lives, we rarely do something simply because it makes us feel good or because it brings us closer to one another, but these are the only reasons to get involved in social dance.

So whether you’re a beginner or an expert, get out there and try a new form of social dance! You might learn something new about a different culture or the way your body moves. Most importantly, you’ll definitely meet new people.

If you’re used to dancing alone, don’t be too shy to show off your moves! Dancing with others might seem embarrassing, but it’s not. Everybody feels the same insecurities you do, but dancing together humbles us. Some studies even say dancing makes you smarter!

The bottom line is that no matter how busy you are, you should still dance, and you shouldn’t dance alone. Find a place for social dance in your schedule, it’ll be worth your time: it will help your soul grow.