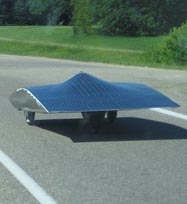 Is solar the next gasoline?

With gasoline prices soaring to ridiculous heights, it’s no secret that everyone is looking for alternatives to traditional gasoline to run our vehicles. From gas made of corn, wood and even trash, to hydrogen, electric and even far-out ideas like steam and nuclear powered vehicles, everyone is trying to come up with the next generation vehicle that will break our dependence on increasingly expensive fossil fuels.

One idea that’s been in development for decades, since long before the current gas crisis began, is solar powered cars. Some have wondered; will solar power be the new gas for American vehicles? The answer is:  Not likely! At least, not as we think of them.
Simply Impractical
While solar powered vehicles have improved more and more over the decades, and we’ve learned a lot about solar power itself as a result, the fact of the matter is that we simply can’t generate enough power to run the typical family car, much less larger vehicles like semi trucks on solar power generated from solar cells on top of the vehicle. Even if this were possible and practical, it would only be on sunny days in places like southern California and Texas. In Minnesota, where the vehicle shown in the photo was developed, it’s simply not realistic. In the real world, solar vehicles are impractical and, let’s face it, goofy looking.

However, even though solar powered cars will never take the place of gas or diesel cars, they’ve taught us some valuable lessons and the development of these experiments certainly haven’t been a waste of time or money. We know far more today about the capabilities of photovoltaic solar cells than we would without the solar powered vehicle contests so popular in university engineering departments across the nation.

While a super-light weight, wing-shaped vehicle covered entirely in solar cells is impractical as a family car, there is a way to have solar powered vehicles on our roads. Vehicles that don’t look goofy, are completely practical, and even fun. We can use solar cells on the roofs of our businesses and homes to generate electricity for the new generation of electric vehicles and they’re nothing to sneeze at.

When most people think of electric vehicles, they think of those horribly ugly little boxes that were developed in the 70’s and 80’s. Not so anymore! A new company called Tesla Motors is already offering a high end fully electric sports car for around $100,000 that is every bit as beautiful as it is powerful. The car goes over 200 miles per charge, making it completely practical for in-town use even in huge cities like Los Angeles. This is far over the previous limit for electric cars and unlike the weak, ugly electric cars of old, this car doesn’t suffer from any lack of power or grace. It can go from zero to 60 in a blistering 3.9 seconds! Just for a point of reference, that’s faster than a Mustang, faster than a Corvette, even faster than a Ferrari. This super-fast, super-gorgeous dream car is not your father’s electric car. This car is the future.

Although Tesla Motors was first out of the gate, it is not the only company working on this new generation of electric vehicle. A company called Zap is offering 5 different electric vehicles, ranging from tiny little pickup trucks to a sports car. Phoenix Vehicles offers an electric SUV that can travel 100 miles on a mere ten minute charge. Even Chevrolet will be offering a full electric vehicle called the Chevy Volt for model year 2010. Taking Tesla’s cue, other companies around the world are also developing fully electric supercars in the high-end range once reserved for gas guzzlers like Ferarri and Lambourghini.

So while typical solar powered cars will never take over the world, electrics are coming into their own and Tesla has started the solar powered race in electrics by offering their customers a solar powered charging station at home to charge their supercars. Welcome to the future!