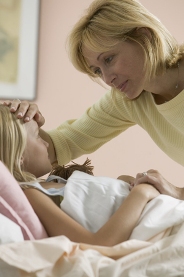 Stomach ulcer in children is uncommon, but parents should know the symptoms.

Stomach ulcer is a condition that we usually associate with adults who have too much stress in their lives or who like to eat spicy food. In reality, stomach ulcer in children is also possible, though much less likely.

What is an ulcer?

Symptoms of stomach ulcer in children are:

If one of your children shows any of the above symptoms, see a doctor right away.

Stomach ulcers can be diagnosed with an upper GI series, which is a series of X-rays of the esophagus, stomach, and small intestine. A doctor may also do an upper endoscopy, which involves sedating the child, then inserting a flexible tube with a camera down the esophagus through the throat. It will be inserted into the stomach and duodenum (small intestine) and will give the doctor pictures of any ulcers. Tissue samples can also be taken during the procedure, which allows testing for h. pylori bacteria.

Fortunately, people with stomach ulcers don’t have to suffer in silence, because there are very effective treatments available. If h. pylori bacteria causeds the ulcer, then antibiotics will be the treatment.

If NSAIDs are the cause of the child’s ulcer, then the doctor will prescribe acid reducers and advise discontinuing the use of the NSAID that caused the ulcer.

Stomach ulcer in children is not common, but it is not impossible. Be sure to take your child to the doctor if you suspect an ulcer.