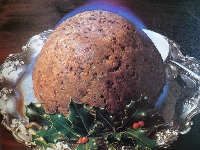 Here in the United States, the traditional Christmas dinner originated from the Victorian era in England. Anyone who has ever read Charles Dickens’ ?A Christmas Carol? can envision the mouthwatering details of the Cratchit?s holiday feast, from the steaming roasted goose to the flaming plum pudding dessert.

While Queen Victoria is credited with virtually inventing the Victorian Christmas, Charles Dickens later revived the ideals and festive traditions associated with the holiday.

In Victorian England, the primary course of the traditional Christmas dinner was the roast goose; not the turkey.  Classic roast goose recipes included sage and onion dressing, cranberries, bread stuffing and apples.

Made with mincemeat and spices, these pies were a significant part of the traditional Victorian Christmas.  According to Victorian custom, twelve different mince pies were eaten by families during the twelve days of Christmas.  Each pie had to be made by someone different.  Often, Mince pies were made in advance, and given to neighbors as holiday gifts.

An essential traditional Christmas dessert, plum pudding is noted for its sweet spices, dried fruit and nuts, and suet.  The pudding is usually moistened with citrus fruits and alcohol such as brandy, then set aflame, and brought to the dinner table ceremoniously.

Eggnog originated from Victorian era drink called posset which contained eggs and milk but also ale.  Today, there are a wide variety of eggnog recipes that generally includes milk, sugar, egg yolks, and heavy cream, and rum or other liquors.