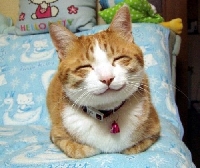 Understanding cat emotions will help you and your cat communicate

There are cat people and there are dog people. Sometimes the twain do meet, but generally people are in one camp or another. Ask any cat owner if their cat has emotions and they?re bound to answer ?Yes.?

According to Purina, cats most certainly have moods and emotions, which can be observed by the animal?s facial expressions and its body languages. Another telltale sign of a cat?s emotions is the noises it is making and the way the feline moves. A cat owner can generally tell if his cat is anxious, frustrated, happy, sad or excited by the way he is behaving and moving.

Cats, like humans, respond emotionally to situations. Emotions can be positive or negative and can be minimal or extreme. Many cat behaviors are accompanied by responses to scents, which is why behavior modification for cats often depends upon cat training products that mimic specific odors.

Before you continue reading about the Understanding cat emotions there is a special announcement we would like to share with you. Catalogs.com has negotiated special medicare rates for our vibrant community of seniors. If you are over the age of 60, you can head over to our Seniors Health Section which is full of information about medicare. All you need is your zip code and a few minutes of your time to potentially save 100s of dollars on your medicare bills.

When a cat or any animal has emotional issues, his behavior may be excessive. For instance, instead of acting a little bit scared, the cat acts absolutely terrified.

According to animal researchers, cats have seven basic, fundamental emotion systems that allow them to respond to information that enters into their brain through their senses.

Included in these seven systems is the cat?s ability to find food as well as a built-in fear system that allows the cat to react and respond to events that are alien and which may be dangerous. In addition the cat knows to take care of its babies, how to play and how to form social attachments.

Cats do experience anger, happiness, fear, and sadness just like humans do, which is how the animal learns. By recognizing that a cat has emotions, this allows progress to be made in areas that deal with pet aggression, nervousness and insight into why a cat is engaged in excessive grooming.

Because cats are mammals, their brain structure and the way their brains work is similar to the way a human?s brain functions. When a cat is happy, it is apt to purr. When it is anxious or frightened, it is likely to avoid people and other animals and withdraw. Although cats do experience emotions, they are not humans and it is a mistake to interpret an animal?s behavior based on what the human perceives as, for example, purposeful behavior done out of spite and which the animal needs to be punished for. It doesn?t work that way. Cats are not people.

Cats can seem indifferent and aloof, unlike dogs that will go out of their way to conciliate their owner. Cats make body contact with humans, which is their way of showing affection. Cats head butt, rub up against humans, and want to sit on their owner?s lap. These are signs of affection. Cats may try to comfort their owner and it is certainly believed that a cat experiences grief when he loses his owner. Cats have also been known to exhibit signs of grief with another household pet dies.

When cats rub up against each other this is ?allorubbing? which is comparable to a handshake or a hug. It also allows the cat to sniff out scents and it helps strengthen the group bond. When your cat rubs up against you it may mean that he wants you to be part of its group.

Cats are very maternal and have been known to adopt, nurse and raise animals from other species. When kittens are taken away from a mother cat, it is not unusual for the mother cat to call and frantically search for her babies.

When we recognize that cats and other animals have emotions it ?humanizes them? and prevents animals from being objectified. It is important to understand how humans behave in regard to animals, including cats. Champion