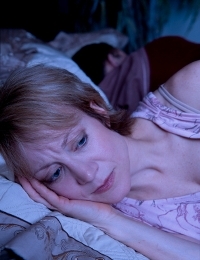 What causes sleep paralysis disorder? Experts say episodes of sleep paralysis can last for seconds?or minutes. An intruding stimulus?a jolt, a noise?can bring the interval to a quick end. The disorder is associated with a particular stage of sleep. People experience during the night three stages of sleep: rapid eye movement sleep, non-rapid eye movement sleep and slow wave sleep. The stages can be detected by recording brain wave activity and observing the rate of eye blinking.

What are the symptoms of the disorder?

Sleep paralysis disorder occurs during rapid eye movement (REM) sleep?the period when dreaming takes place. Bodily paralysis is a natural occurrence during REM sleep. In fact, the inability to move during that time of dreaming, drifting off?or coming back to full consciousness?is a marvelous safeguard against inadvertent injuries. It seems Mother Nature requires everyone to be fully aware before they jump out of bed and hit the ground running. Otherwise, they might just?hit the ground.

In sleep paralysis disorder, wakefulness resumes but the body still maintains for some period of time?a few seconds to several minutes?its naturally paralyzed state. The newly awakened brain suddenly is firing on all cylinders but in a mounting state of confusion sleepers realize their bodies are incapable of movement. Brain and body are out of sync. It takes a moment to realize the situation and cope by waiting, moving very slowly or moving with force, through sheer will.

What is the emotional component?

Afflicted sleepers can feel panic. Questions scream across the mind in the moments during paralysis. Am I dead? Did I have stroke? Have I become paralyzed for life? What if this feeling never passes? Equally disturbing are the hallucinations that sometimes are a part of sleep paralysis disorder. The fantasies may be delightful or devastating.

Various cultures try to explain the hallucinations by embracing theories of visitations by spirits, witches, devils and ghostly creatures that perch like weighty burdens upon sleepers’ chests. Perhaps the visions provide an explanation for reports of close encounters with heavenly angels?or aliens from outer space.

Can treatment be effective?

Medical professionals have found that education offers a means of treatment. Sufferers who learn about the disorder attain a higher level of comfort with the outcomes of this condition. Among the medications used when warranted are Ritalin?which can help to regulate sleep schedules?and Clonazapam?a drug with sedative and anti-convulsive properties.

Before going to extremes?or to bed?victims of sleep paralysis disorder surely will want to try some behavior modification techniques. Recommended behaviors include establishing a regular bedtime and varying sleep positions. Refraining from eating before bedtime may help. Another effective technique relates to stress reduction; try not to think about problems before bed.

The benefits of sleep are well documented. The body renews itself during sleep. An undisturbed sleep is crucial for maintaining vim and vigor. The hours when a person sleeps are the hours during which the body repairs itself; the immune system, the nervous system and all the body’s marvelous mechanisms are maintained at that time. True is the old Irish proverb: A good laugh and a long sleep are the best cures in the doctor’s book.