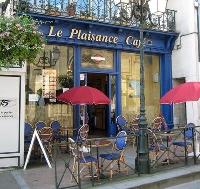 You have decided to completely redecorate your kitchen and have determined you want a bistro theme. Your family and friends are inquiring, what IS a bistro style kitchen?

A bistro is generally a small and informal eating establishment, originating in France. It is believed the word ‘bistro’ came from Russian soldiers in France during World War I who demanded their food served speedily, barking out ‘Bistro!’ meaning ‘fast’ in Russian.

Food served in this eatery is home-cooked, not fast food, nor, on the other hand, is it persnickety, elaborate fare. The atmosphere is laid-back, the food is good but not extravagant and lots of vin rouge is consumed.

The origin of foods found on the menu in this kind of restaurant are often the result of using leftover foods. When there was meat or vegetables remaining they were tossed together and made into a robust stew. Nothing went to waste. It was war time.

Examples of food served in a bistro include French onion soup, Porotobello mushrooms and coq au vin, all requiring extending cooking time but served quickly to the patrons. This is not a place where patrons have to wait an hour to get their food.

To achieve the look in your kitchen, acquire pub stools, cafe tables and various pieces popular in France during the 19th century.

A cafe table is approximately 30 inches tall. Some are taller (42 inches) and may feature a footrest close to the bottom of the table. Guests can stand around the tall cafe table rather than sit, or tall chairs or stool can be used. The diameter of a cafe table is usually less than that of a table sitting closer to the ground.

Consider using an opera table, which is a round, pull out table. Expand the table when you have guests. The chairs surrounding an oval or round table are often made of steel.

To fully achieve the ambience of a bistro, use wall art in the room. Wall quotes are a great way to liven up an area, particularly the kitchen, where people always convene. You can find wall art perfectly complementing the bistro look. Try short quotes in French, names of wines or a list of your culinary specialities to start. Have fun. Removable vinyl lettering can be changed easily whenever the mood strikes and the menu changes.

If you really want to go all out, incorporate a colorful, striped umbrella, coordinating it with the table and chairs. This requires a table with a hole in the center to accommodate the umbrella. You will think you are dining outside. This is a particularly good look for a patio. If the umbrella idea is too much for the kitchen, replicate the scene on your patio.

If you are painting the walls, consider texturing. You can buy textured paint or create it by adding sand from your children’s sandbox to the paint.

Another approach is Venetian plaster, which results in a surfaced look reminiscent of 19th century French or Italian eateries. To achieve the look, put a thin layer of plaster on the wall, using a trowel or putty knife. Smooth the plaster using a larger trowel. Let it dry.

Using the same small trowel, apply the second coat of plaster. You do not want the walls to be smooth so execute x-shaped motions, creating texture. Let the second layer dry.

When this last layer has dried, sand the wall using a hand sander and 100-grit sandpaper, employing an ujp and down motion when sanding and a light touch. Now you are free to paint.

Create a delightful space where people can eat, socialize and relax. They may begin to think they’re in an authentic bistro. Dim the lights, turn on some music and break out the wine.