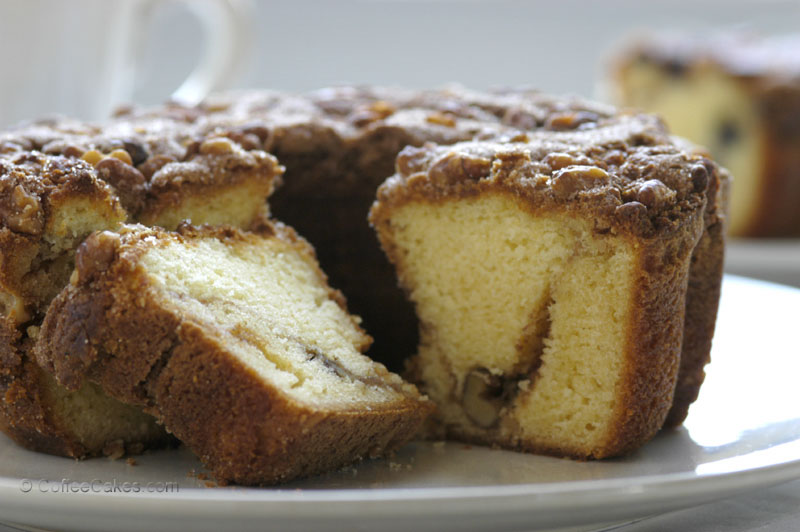 What is coffee cake

So, what is coffee cake, really? According to Webster’s New Word Dictionary of the Culinary Arts, the nation’s favorite sweet treat is a “leavened bread-like cake usually flavored with nuts, fruit, or spices and topped with frosting, glaze, or streusel.” It’s traditionally served during either breakfast or brunch and normally comes paired with a coffee or tea.

The treat’s extensive history is quite interesting as it transformed through its many different iterations into what now commonly called coffee cake. With a multitude of different possible ingredients and methods of creation it’s a fun treat to experiment with for cooks and diners alike. Without further ado, let’s take a look at coffee cake, its history, and some of the best ways to serve it at your next get-together with family and friends.

As previously mentioned, this delectable sweet evolved over many ‘a century. It wasn’t invented per se, according Foodimentary resident expert John-Bryan Hopkins, but more or less evolved throughout many centuries into what we now know today. A few interesting facts back up Hopkins’ notions on the treat: during biblical times it was made from honey, dates, and other such fruits, and, as the years progressed, it transformed into what was to become the earliest version of the treat, courtesy of the Danish people’s culinary creation. And, in the Danish version, there was actual coffee inside, too!

During the 17th century, it became common custom to match this sweetbread or cake with a helping of a coffee during breakfast or brunch. And it’s this tradition which has carried forth into today’s current times. From Stollen to Tortuga Rum Cake and everything in between — it’s a fascinating history lesson!

What Is It, Exactly?

The American Heritage Dictionary of the English Language offers a succinct and “sweet” definition of today’s “evolved” version: according to them, it’s a “cake or sweetened bread, often containing nuts or raisins.” In many instances — as we’ve mentioned many times previously — it’s served with a helping of coffee (or tea) during breakfast or brunch.

It’s true that certain experts do argue that the nuts or raisins aren’t exactly necessary for a successful preparation and/or dining experience, but, in the end, that’s not of too much consequence. It’s basically, at its heart, sweetbread or cake, most of the time served with a side helping of coffee or tea.

How Do We Get This Gooey Goodness?

Want a blueberry version? Maybe you’d enjoy a cinnamon walnut variation? Chocolate walnut? Banana walnut? And top it all off with a crumb topping known as Streusel, or a light drizzling of glaze? Sounds pretty good, doesn’t it?

For those interested in getting their hands dirty and putting in a little kitchen work, Food Network offers a multitude of sweetbreads and cakes, prep/cooking options, and cook time necessary to get it all done before your guests arrive for the big — or more intimate — shindig. In most cases, cooking times run between 20 minutes (at the short end) and approximately an hour and a half (for the more lengthy preparation and cooking recipes). The options run the gamut as well, with ingredients like sour cream, blueberry, orange, pecan, and many, many more. It’s simply what your specific tastes dictate; and the sky’s the limit in terms of prep options.

If you’re someone who doesn’t have the time — or the inclination — to spend in the kitchen, there are some  top-notch options for you as well. Many online food retailers offer a simple, no-hassle way to find your favorite treats. With free shipping and a plethora of diverse options, heading online to find your most-cherished treats can be a unique and simple fix for those in a time-crunch. While there, you can revel in the challenge of finding just the right treat, amidst many, many options, for you and your guests.
~
What Have We Learned?

In essence, coffee cake has been around since the almost the beginning of time, in one early form or another. Throughout the years, it’s evolved into what we now know today. For many, it’s a treat which brings back memories of their mother’s or grandmother’s cooking when they were young. All sorts of ingredients can be thrown in, such as blueberries, raspberries, apples, walnuts, pecans, sour cream, oranges, and beyond. It’s a treat that goes best with coffee or tea and should normally be served during breakfast or brunch with family and friends.

So, what is coffee cake? Prepare it yourself, head online, or travel to your local grocery store to find out! You won’t be disappointed!

Above photo attributed to The Integer Club