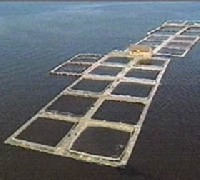 Wondering what is farmed salmon, the answer is the opposite of wild salmon

Wild salmon and farmed salmon differ vastly. People who enjoy seafood often do not know the difference between the way these are brought to market.

Wild salmon is most often caught by veteran fishermen, who know where and when to fish. The fish is harvested from open water, and flash-frozen to maintain its freshness and high quality. Wild salmon is a sustainable food source, for example, wild Alaskan salmon has earned the “Super Green” designation by the MBA Seafood Watch.

On the other hand, some of the salmon available at your fish purveyor is farmed-raised. What is farmed salmon? Exactly that – fish raised on a “farm.”

Salmon farming is considered by many a destructive aquaculture production system.

The perils associated with farmed salmon include the open net cages that are put into the ocean. Natural predators of these fish, including seals and sea lions, meet their demise when attracted to the pens of fish. The marine mammal are shot by fish farmers because they are a threat to the salmon. Dolphins, seas lions, seals and porpoise get ensnared in the open nets and drown.

Chemicals, farm waste, parasites and disease are released into the water when farming occurs. This harms marine life.

The farmed type is grown in pens located near the ocean shore eat food polluted with toxic PCB chemicals and permeated with antibiotics used to fight contaminated conditions.

Surrounded by excrement, this contaminates the fish. However, some farms practice sustainability and the health concerns are not as great when these practices are adhered to.

Salmon are carnivorous fish, requiring lots of protein in their feed, which comes from wild fish. As a result, wild fish are specifically raised to be fed to the salmon. This practice depletes wild fish stocks instead of supplementing them.

Sea lice are rampant in these farms, posing a threat to juvenile wild salmon. Sea lice are marine parasites transported by the tide. They attach themselves to marine life and feed off skin or mucous. Seas lice invade the surrounding waters, attacking baby salmon.

When in excess of 500,000 fish are contained in a small area, fish feces and waste feed harms the surrounding ecosystems and the bottom of the ocean, particularly when the water is shallow.

When farmed salmon escape this poses a problem for wild fish. The escapees out-compete their wild counterparts when vying for food and habitat. In addition, the escapees spread pathogens and disease to wild fish.

Nutritionally, there is a marked difference in wild versus farmed salmon. Omega-3 fatty acids, which are good for humans are actually higher in the farmed fish; however, they are the result of feeding the salmon fish oil or fish meal. Fish oil and fish meal come from the bulk harvesting of fish closer to the bottom of the marine food chain. This practice does not bode well for the future of the marine ecosystem.

The farmed version contains more omega-6 fatty acids than omega-3. Americans already eat too many omega-6 fatty acids. When consumed in excess this obscures the benefits of omega-3 and encourages heat disease, cancer, senility and diabetes.

Another benefit of eating wild as opposed to the farmed version is vitamin D that is found in abundance in the wild version. one 3.5 ounce serving of wild contains 600 to 700 IU of vitamin D. Farmed contains 1/4th that amount of vitamin D.

Vitamin D is necessary because it builds and maintains strong bones and lessens the chance that a person suffers fractures, acquires osteoporosis and cancer.

The wild type of salmon is healthier for you because it is not purposely fattened as is the farmed version. When intentional fattening occurs, more PCBs accumulate int he fish tissues. PCBs are cancer-causing chemicals and are included in the ‘dirty dozen’ toxic chemical list.

Farmed has 52 percent more fat per ounce than an ounce of the wild version, according to the U.S. Department of Agriculture (USDA) Before eating the farmed version it must be cooked to reduce the fat content.

Both types contain low levels of mercury, which is good.

The Environmental Protection Agency (EPA) regulates wild whereas farmed salmon is regulated by the FDA (Food and Drug Administration) and USDA, which allow a higher level of contaminants in the fish than are permitted in wild fishn.