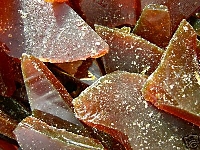 Molasses is what gives toffee, a confection, its distinctive taste

Toffee isn?t a candy that one hears a whole lot about, but it goes back a long, long way and many people love it despite its somewhat low profile.

Toffee is made from butter and sugar, differing from caramel, which is made from cream or milk, sugar and sometimes butter. Cooking toffee and caramel by using different techniques is what produces a different type of candy. Toffee breaks easily whereas caramel bends because of the long-grain crystals it boasts. Toffee has short grain crystals and doesn?t normally bend.

Toffee has long been associated with Halloween. Halloween toffee is called bonfire toffee as well as Tom Trot, plot toffee, cinder toffee and treacle coffee. This type of toffee contains a lot of black treacle, which is molasses.

In the 17th century, treacle was used for medicinal purposes. It was quite expensive so toffee, which was produced using treacle (molasses) didn?t catch on because very few could afford the molasses.

It wasn?t until the early 19th century that the word toffee first appeared in print. Today, gourmet English toffee, and all its flavor variations, is a favorite among confection afficionados.

Toffee is considered a confection, which means it is a food item that is loaded with sugar. Confections are high in calories and not at the top of the best-foods-to-eat list, but they?re yummy. A little bit never hurt anyone.

Molasses is the most important ingredient of toffee. It provides the distinctive taste to toffee. It is faintly bitter and far less sweet than sugar.

Toffee is created by caramelizing sugar, or molasses. Butter is added and sometimes flour. This mixture Is then heated until it reaches 300 to 310 degrees Fahrenheit, which is the hard crack stage. Higher temperatures and lots of sugar will produce hard, brittle candies. Lower temperatures produce softer candies. When the mix reaches the hard crack stage, the threads are brittle.

Making toffee requires that you boil the ingredients until the mixture is unbending yet you are able to pull it into a shape. The shape maintains itself and has a shiny surface. You can pour the mixture into a tray that is shallow, allowing the mix to cool on the sheet. Depending on the way you proceed, including the temperature that you use, the toffee will vary. It can be very hard, sticky, brittle or even soft.

Some people add white vinegar to their toffee, which changes the composition of the mixture, and it is not as brittle. It is also sharper tasting.

Most of the toffee that is found in the United States is referred to as English toffee, which means it has been prepared with a coating of almonds and chocolates.

In the United Kingdom, candy apples are actually toffee apples or apples that have been coated with brittle candy, such as toffee.

Starting in the 1850s, toffee was put into airtight tins. These tins were pretty and also functional and people often liked the tins as much as the toffee itself. The better, the prettier and the more decorative the tin the better the status of the toffee was considered to be. Toffee frequently given (in the tin) as a gift.

Additionally, toffees were sometimes individually wrapped, which was a well-appointed way of presenting this candy to customers.

No one knows for sure who invented toffee, but it is thought that the word toffee comes from the Creole word for a combination of sugar and molasses. Creole language is a natural language that came about when parent languages were mixed. Alternatively, the word toffee may have been derived from the West Indian rum that was made from molasses and the juice from sugarcane and was called tafia.

Lifestylebitterbrittlecandycoffeecreolehardmedicinalmolassessugarsweettafiatoffeewhat is toffee made from - by Catalogs Editorial Staff