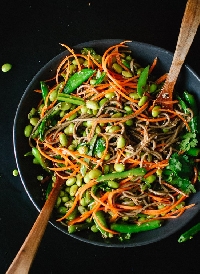 For the uninitiated, vegan cooking might sound a bit odd. Someone used to an omnivorous diet might look at the idea of veganism as living off of side dishes (considering meat is the main protein source for many of us).

Vegan dishes can actually be quite fulfilling, providing a low fat, low cholesterol alternative to meals heavy in animal flesh and by products. Let’s explore a little bit about veganism and the basics of making vegan food.

Vegan food is food that is produced without any product from an animal. This means no meats, cheeses, milk, rendering, etc. Vegan food is also generally prepared in cookware that is not used to cook with animal products.

It is important to note that veganism is not an all-or-nothing thing. While you do need to maintain a vegan diet to call yourself a vegan you can simply incorporate periods of vegan eating into your routine and still receive some of the health benefits which include lower risk of heart disease, among other things.

Cooking with these replacement products can be a bit tricky. For example, not all recipes will taste the same if you replace regular milk with a vegan alternative, however, in many cases it will work just fine. It is also important to distinguish vegan foods which contain no animal products from vegetarian foods which contain no meat but may contain dairy or other animal product.

Where to Look for Vegan Food and Recipes

Vegan foods are generally available at most major chain restaurants, but you are most likely to find the best vegan menus at certain ethnic restaurants. Restaurants that serve cuisine from places like East and South Asian usually offer a wide variety of vegan and vegetarian dishes because those dishes are prominent in their culture. Many pizza restaurants also offer vegan pizzas with no cheese and milk free dough.

You can find Vegan meals ready to warm and eat in the frozen section almost every grocery store where they tend to be grouped together in the frozen food section. Finally, you can simply try searching for vegan recipes on the internet, these can range from very simple and quick recipes to large family-sized meals.

I hope this introduction offered some clarity as to What Is Vegan Food. Check out some vegan recipes and try some out with your family tonight. The tasty to healthy ratio is unmatched!