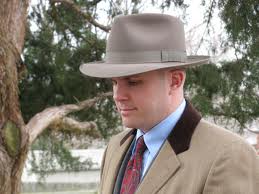 What men wear to church depends in large part on what church they attend. Some churches advocate the casual come-as-you-are look. Blue jeans and tennis shoes are de rigueur. However, other churches are more traditional and the members of the congregation dress to the nines for worship service.

For women, this means suits, high heels and hats and for men, their best suit. For many men, church Sunday is also an occasion to wear a conservative fedora, dress shoes and a top coat in the winter.

For those long accustomed to the get-dressed-up-for-church dictate, walking into a house of worship where the attendees are decked out in t-shirts and jeans is a shock to the system.

Men take suit shopping very seriously. They do not do it very often. Research shows the average man buys a new suit every 2.5 to there years and owns two suits. Suits can be costly and are a huge investment.

GQ has a lot of tips on the type suit a man should wear. The lapel on a suit determines the suit’s character.

Lapels got narrower in the 1950s and ’60 (e.g., Mad Men) and then became wide again in the 1970s, when peak lapels became popular once again. In the 1980s the double-breasted suit came into vogue, with the peak lapel. That changed during the 1990s when the single-breasted suit with subtle notch lapels were the top choice. In the new millennium, slim-fitting suits with narrow notch lapels became de rigueur, according to the Wall Street Journal.

The single-breasted jacket with peak lapels has bounced in and out of popularity with male consumers over the years; however, the single-breasted suit with a notch lapel has been the best seller in the U.S. for decades.

Keep in mind, a peak lapel makes a suit look more formal. If you want to wear a dress jacket with jeans and no tie, choose the more informal notch lapel. Peak lapels are typically found on tuxedo jackets and tailcoats.