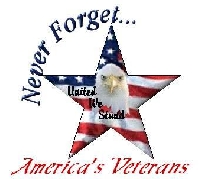 Twelve ways you can thank our veterans for their service

There are four days during the year that have special significance to veterans:  Memorial Day, Veterans Day, Flag Day, and Independence Day.

Memorial Day was first known as Decoration Day, and was set aside to remember those who died serving our country in uniform.  It was first officially observed on May 30, 1868 as a day to remember Civil War veterans buried in Arlington National Cemetery.  After World War I, the day was designated a national holiday to honor veterans who died fighting in all American wars.

A temporary World War I armistice went into effect on the eleventh hour of the eleventh day of the eleventh month of 1918.  A year later, President Wilson proclaimed November 11 as Armistice Day to commemorate the conclusion of the ?war to end all wars.?  After the Korean War, the holiday was changed to Veterans Day to honor veterans of all American wars.

While the idea to celebrate the American flag originated in the late 1800s, it wasn?t until 1949 that President Truman signed the act that designated June 14 as National Flag Day.  Three weeks later the birth of our nation is celebrated on Independence Day.  While the text for the Declaration of Independence was finalized on July 4, 1776, there is evidence that many of the signatures were not obtained until several weeks later.

There are many ways to honor veterans that range from the formal to the informal.  Here are twelve ideas that you might consider throughout the year, so don?t wait for a national holiday to show your appreciation.

1. Make it visual: wear a lapel pin, give a gift of a service plaque, or a medal to a veteran who has achieved something in your community.

2. Take a veteran to lunch or dinner.  If you don?t know one personally, you can contact the nearest chapter of the American Legion, Veterans of Foreign Wars, or other veterans organization.

3. Make a donation to the Memorial Day Foundation.  This organization places flowers on war monuments in and around the nation?s capital.

4. Fly a flag at your home.  On Memorial Day, lower the flag to half-staff to honor veterans who made the ultimate sacrifice.

5. Observe the National Moment of Remembrance at 3 p.m. local time on Memorial Day.  This moment of silence, officially designated by Congress, is an opportunity to show respect and reflect upon the sacrifices of the veterans that paid the ultimate price to protect our freedoms.

6. If you have the financial resources, sponsor a scholarship for a veteran attending vocational school or college.

7. If you live near a military hospital, drop by and visit the wounded veterans.  Donate to Help Hospitalized Veterans, a national, non-profit organization that distributes free therapeutic arts&crafts kits to veterans in military medical facilities and nursing homes.

8. Participate in Wreaths Across America, an extension of the Arlington Wreath Project.  Every year, this group places wreaths at the grave sites of veterans on the second Saturday of December.  You can volunteer and donate to this effort to honor veterans across the country.

9. Participate or sponsor someone in the Veterans Honor Parade that makes its way along the east coast in early December.  Consider joining the Patriot Guard Riders that escort wreaths in their journey to Arlington National Cemetery.  March in your local parade that celebrates one of our national holidays to honor veterans.

10. Volunteer to help a veteran with house repairs or shopping, or volunteer for a group that performs these services, especially for disabled and aging veterans and their families.

11. If you are musically inclined or have a band, volunteer to provide entertainment at a veterans event or VA hospital.  Compose a poem and recite it at the event or at your church or other gathering.

12. Involve your children by explaining the significance of Memorial Day and other important national holidays.  Have them place flags or flowers in cemeteries to honor our fallen heroes.  Take them to visit one of our many war memorials or a Civil War battlefield.  Talk with them about the Gettysburg Address, one of the greatest speeches ever written.

13. Donate to a nonprofit group that helps veterans throughout the year.

Our veterans take an oath to support and defend the Constitution of the United States against all enemies, foreign and domestic, and to give their lives if called upon to accomplish their mission.  There is no greater sacrifice, and we should honor veterans all year, even if it?s something as simple as saying ?thank you for your service to our country.?