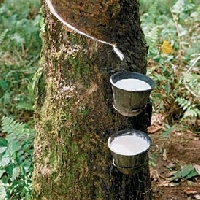 Rubber bands, balls, shoe soles and tires were originally made of natural rubber

What do car tires, erasers, bouncy balls, shoe soles, elastic bands and gaskets all have in common?  They are all products that are made from rubber.  Where does rubber come from? Most people would be surprised to learn that rubber, a common, household material, is actually derived from living trees.

I first learned about the origins of rubber during a trip to South America, where we encountered the two most common varieties of the rubber tree, Hevea Brasiliensis and Castilloa.  These tropical trees, native to the Amazon River basin of Brazil, are the initial answer to the question, where does rubber come from?  As the first source of the world?s rubber, rubber from these trees was harvested during the mid 1800s.  During these early years, Brazil held the monopoly on rubber production.

Not unlike maple syrup, rubber is a sap that is harvested from trees by tapping.  Rubber harvesters cut pieces of bark away from the tree, or make small incisions in the bark.  The milky white sap then oozes out of the bark down a spout and into a bucket.

Some scientists believe that this liquid latex sap, contained in rubber trees, is actually a defense mechanism to deter predators, such as insects and microorganisms from wounding the tree.

Once a significant amount of the liquid latex has been gathered in buckets, harvesters begin the process of curing or reduce the rubber.  Typically, the harvester builds a fire of green palm nuts, and smokes the liquid rubber in a large pot over the fire.

Twirling a paddle over the fire, the harvester hastens the thickening process.  Slowly, the liquid latex congeals into a solid ball of rubber.  These balls, composed of large quantities of rubber collected over a several day time period, may range from eighty to one hundred pounds in size.

Amazingly enough, one single rubber tree may be tapped regularly, even daily, as it will heal over the tapping incisions and continue to produce latex sap.

Brazil held the monopoly on world rubber production until 1876, when Henry Wickham, a British politician, visited the Amazon basin and smuggled a large quantity of rubber seeds back to Kew Gardens in England.  Rubber trees were carefully cultivated in Kew Gardens, and then trees and seeds were shipped to Asia.  This marked the end of the Brazilian rubber boom, and the beginning of more efficient, commercial rubber plantations in Asia.

It wasn?t until the beginning of WW II, when demand for rubber skyrocketed, and political disputes led to significant fluctuations in rubber price, that synthetic rubbers were first researched and experimentally produced.  In 1909, a team of scientists working under Fritz Hoffman in Germany?s Bayer laboratory are credited with producing the first synthetic rubber, of polymerized methyl isoprene.

By 1942, Japan conquered Asia, thus placing the majority of the world?s natural rubber supplies under the Axis Powers.  The U.S. government, desperate for rubber for military truck tires, and other war machinery, needed a more modern answer to the question where does rubber come from.  The government launched a covert operation to improve synthetic rubber, under the guidance of chemist Edward Robbins.  By 1944, a total of 50 factories were manufacturing new, synthetic varieties of rubber.

In 1960, the world production of synthetic rubber surpassed the production of naturally harvested rubber.  Where does rubber come from today?  Only about 30% of rubber in the current market originates from tropical trees.  However, some products such as airplane tires and car tires still require a high percentage of natural rubber.

As chemists and scientists continue to explore new methods of synthesizing rubber and rubber polymers, the percentage of natural rubber in commercial use may continue to decrease, a trend that may ultimately prove beneficial to the tropical rain forests.