Why do people faint 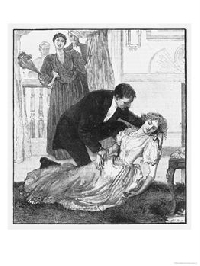 Fainting is not caused by hysteria, as was believed in the past

In the Victorian era, and even long before that in ancient Greece, women routinely succumbed to the vapors, or hysteria, meaning that they frequently fainted with little or no provocation. In fact, it may have even been a bit de riguer to faint on occasion. You got to be the center of attention that way.

Smelling salts were brought to the rescue. Hysteria, which led to fainting, was caused, so physicians believed, by sexual deprivation in passionate women. Hysteria was noted quite often in widows, virgins and sometimes among married women. If married, immediate intercourse was recommended to cure hysteria, and, if single, personal massage was prescribed to be administered by a midwife.

Smelling salts, which are made of perfume and ammonium carbonate, were used to revive the frail 19th century women who fainted a lot. Later on, it was discovered that the ingredients in smelling salts are potentially dangerous.

Before you continue reading about the Why do people faint there is a special announcement we would like to share with you. Catalogs.com has negotiated special medicare rates for our vibrant community of seniors. If you are over the age of 60, you can head over to our Seniors Health Section which is full of information about medicare. All you need is your zip code and a few minutes of your time to potentially save 100s of dollars on your medicare bills.

When a woman was experiencing the vapors, which was probably a euphemism for being mad as hell or struggling with premenstrual syndrome or menopause, this meant that she was suffering from hysterical depression or hypochondrias, which often led to fainting spells.

Nowadays we know that this is all sheer nonsense. Fainting is not due to sexual deprivation or a misconstrued idea of female hysteria. People swoon for a lot of reasons, but generally not because of hysteria.

The medical term for fainting is syncope, according to Kidshealth.org. If you feel as though you are going to faint but do not, this is called pre-syncope.

Generally, when someone faints it is the result of alterations in the circulatory system or nervous system that causes the amount of blood in the brain to drop temporarily. When this occurs, the brain is denied its needed blood supply and a person loses consciousness and topples over. When the person is prostrate, this helps restore the flow of blood to his brain and the person recovers and wakes up.

Low blood sugar can result in fainting. Your brain needs a constant supply of sugar from your blood to keep you awake and your body functioning properly. If you are crash-dieting, taking too much medication or are a diabetic you may develop low blood sugar and faint.

Getting too hot can cause dehydration and this can make you faint. Sometimes, just standing too long or getting up too quickly from a seated position can result in fainting.

Emotional stress can, in fact, prompt fainting, but it is a bit more complicated than experiencing some sort of ridiculous and baseless female hysteria related to lack of sex. If you are shocked or frightened or in pain, this can take its toll on your nervous system and result in a significant drop in blood pressure, which can cause you to faint.

If you are over-breathing, or hyper-ventilating, this increases the carbon monoxide in your blood to drop and you may end up fainting.

Pregnant women sometimes faint because of changes in their circulatory system and dehydration. They require more fluids because of the extra fluid requirements that their body is making on them. As the uterus grows, it can compress and block blood flow through the blood vessels. This decreases the supply of blood to the brain and the woman can end up fainting.

If you are iron poor, or anemic, this can lead to fainting. Cardiac problems can cause fainting, particularly if you are exerting yourself and are not aware that your heart is not functioning at it should be. Frequent fainting can indicate a heart problem.

Fainting once is usually not an indication of a medical problem. The patient should take precautions, hydrate and rest. Multiple episodes of fainting, or fainting accompanied by illness and other symptoms should be evaluated by a physician.