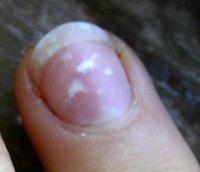 A barometer of general health, you should know why fingernails get white spots

For those people who are particular about their appearance, the presence of unsightly fingernails is not something they want to experience.

Fingernails are actually a barometer of your health. Look at them. Do you see white spots? Ridges? Dents? Are the nails an unusual color or shape? Sometimes this is the result of lack of nail care but other times it indicates that there is something wrong with your health.

So why do fingernails get white spots? Awareness of the anatomy of the nail is helpful. The nail is made of keratin, which is a protein. There are layers of protein on each nail. The nail grows from the cuticle, which is the base of the nail. A healthy nail doesn?t have grooves or ridges, and the color is consistent and uniform. There isn?t any discoloration or spots.

Generally, white spots on fingernails don?t mean anything and aren?t cause for alarm. They can be the result of an injury to the nail base or the matrix, which might have been so incidental that you don?t recall injuring the nail.

Fingernails that have become curved, or opaque (white), pitted, indented, yellow or have separated from your nail bed, which is referred to as onycholysis. These abnormal conditions require that you see a doctor.

White marks, which are medically referred to as leukonychia, can crop up after an injury. In the Greek language, leuko means white and onyx means nail. White spots are found more often on fingernails than toenails.The mark may remain for months but it will eventually go away.

It usually takes about two months for a fingernail to grow out. Fingernails grow on average one-half inch each month. The white spot may have disappeared by that time. If it doesn’t, you can cover the white spot using tinted ridge filler.

White bonds or specks or bands are very common. However, if the entire nail is pale white (opaque), this can indicate that you have a nutritional deficiency caused by a medical problem, such as anemia or liver disease. There is another possibility that white spots on your nails may mean that the nails lack protein (keratin) or are very dehydrated. You can keep your hands and nails properly hydrated by massaging them with mineral hand cream. White spots do not indicate a calcium deficiency, according to Dr. Andrew Weil.

As people age, they lose moisture in their skin as well as in their finger- and toenails. There isn?t as much moisture and oil in the nail bed as there was when younger, which causes dry, brittle fingernails. Age may contribute to white spots and other nail issues.

Sometimes, after removing acrylic nails, white spots can appear on the natural fingernails, which is probably the result of trauma to the nail bed when the acrylic nails were applied. Another possibility is that an allergic reaction has occurred because of sensitivity to a product that was used. White spots on occasion are an indication of an infection in the nail.

The Mayo Clinic advises that keeping your nails clean and dry prevents fungi, bacteria or other organisms from growing underneath your nail, which can cause discoloration as well as other problems. Don?t pull on your hangnails, because this tears tissue that is alive. Quit biting your nails and/or cuticles. Moisturize your nails just as you do the rest of your skin.

Eating a healthy diet and taking daily supplements that target skin, hair and nails will safeguard the health of your nails.

You may want to back off on manicures and applying fingernail polish or acrylic nails if you are seriously concerned about the health of your nail. Let them rest for a while. It?s not the end of the world. Go au natural.

Nail infections can be serious and they can also be contagious so seek out professional advice if this is a concern.