The history of flags 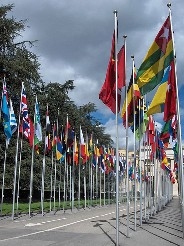 Throughout history, flags have been flown as decoration, signals, and symbols

Every country in the world has specific symbols and emblems that are significant to that country?s citizens, but none more enduring than the flag. Flags have been around for centuries, symbolizing countries and clans, and giving individuals a visual reminder of where their loyalties lie. The history of flags is as full of meaning and symbolism as the flags themselves are.

The history of flags

The first types of flags were used more than 4,000 years ago, and were called vexilloids, which means ?guide.? They were not the cloth banners that we think of as flags today, but were wood or metal poles. The tops of the poles were decorated with an individual carving. These vexilloids first appeared in Iran, Egypt, and Greece.

Before you continue reading about the The history of flags there is a special announcement we would like to share with you. Catalogs.com has negotiated special medicare rates for our vibrant community of seniors. If you are over the age of 60, you can head over to our Seniors Health Section which is full of information about medicare. All you need is your zip code and a few minutes of your time to potentially save 100s of dollars on your medicare bills.

The practice of decorating these poles with fabric and other materials began about 2,000 years ago, making them more like the flags we know today.

The reason for flags

Flags were used as markers and symbols, simply as patriotic decor, and also as a means of identity. When knights went into battle covered with heavy armor, it was nearly impossible to identify them. Each knight would carry his own flag or banner into battle as a means of identification. Eventually, flags became symbols of specific clans and countries. Today, every country in the world has its own flag, as well as all the states of the United States, and many organizations, like the United Nations and the Red Cross.

There are certain symbols in flags that are known around the world. The white flag as a signal of surrender is internationally known, as is the red flag of warning or danger. The skull-and-crossbones flag, also known as the Jolly Roger, is the known symbol of piracy.

How a flag is displayed also has meaning, such as when a flag is flown at half-mast in honor of someone who has died. During funerals of military veterans, the flag of the United States is draped over the coffin of the deceased.

Flags are colorful representations of the countries of the world, but the colors are not purely decorative. Each color has a symbolic meaning. Black represents death and mourning. Red symbolizes bloodshed, revolution, war, and power, while white symbolizes peace. Orange is meant to represent courage and sacrifice. Yellow symbolizes gold, and green represents the land, youth, and hope.

Symbolism in the American flag

The stars and stripes of the American flag have specific meaning. The original flag of the United States was adopted in 1777, during the Continental Congress. It displayed thirteen red and white stripes and thirteen stars, which represented the original thirteen colonies. Today?s American flag continues to display the thirteen stripes to honor the original colonies, and there is now one star for each of the fifty states.