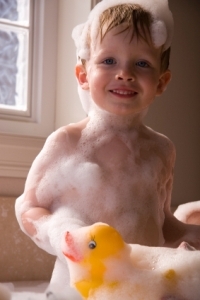 Peek-a-Boo is more than just a fun game for baby.

Developmentally, the answer to how early should a child know about body parts is very soon after birth. Even small infants begin to show curiosity about parts of their bodies while staring at their hands and bringing their toes up to their mouths.

Babies learn first by touching and seeing. Anyone trying to sooth a fussy baby knows how important touch can be. We quickly check off the things a baby feels as we try to calm him or her. Is he or she wet? Is he or she hungry? Is there a gas bubble? Is he or she cold? The baby feels what is wrong but cannot say so we keep groping and trying till we get it right.

Good Ways to Teach your Baby about Body Parts

Between six months and a year, a baby’s understanding of body parts changes. Babies begin taking charge of their bodies, holding up their heads and getting organized to crawl. This is a great time to play ‘Where’s your. . .?’

Increasingly, a baby will giggle in anticipation of your saying ‘Where’s your tummy?’ and tickling it or ‘Where’s your nose?’ and touching it. This develops into ‘Where’s your nose? Where’s my nose?’ A baby still cannot say the words but his or her fund of words is growing rapidly and learning about body parts is a favorite.

At about a year most babies become even more aware of their bodies as they pull up and get ready to take some steps. During this explosive growth period babies also begin to organize vocalizations and sounds into speech.

Peek-a-boo is an endlessly popular game with your face and sometimes baby’s appearing, disappearing and reappearing. When asked ‘Where’s my nose?’ a baby will reach quite definitely toward your nose and may also say ‘Oh’ meaning ‘nose’ and ‘Mmm’ meaning ‘mouth.’

Over the next six months to a year, increasing amounts of intentional speech show you how much your baby has already learned. A toddler begins to respond to ‘Where’s your . . .?’ by reaching for his or her head, tummy, and feet. Feeding him or herself and toilet-training bring even more interest in body parts.

He or she seems to absorb names of body parts as fast as you can provide them: ears, fingers, back, bottom, and, of course, words for parts ‘down there’ as well. From just two years, the phrase ‘I did it’ has a very long translation, meaning ‘I’ve been hearing what you say and feeling what you’ve been touching. I now know how to pick up the cracker, hold it, put it in my mouth, chew it and swallow.

The Importance of Knowing their Body Parts

How early should a child learn about body parts? Clearly your child has been learning for a long time. Knowing the correct names for those body parts is the most important task for two to three-year-olds for two important reasons. First, between ages two and three children begin overcoming their fears of new people. When they express things to people who do not know them as well as parents do they need to be able to say what they mean.

Also, many childcare programs begin close to age three. Whether it’s a cooperative play group or full time daycare for working parents, children need to be confident in asking other adults to help them. Most childcare professionals like mothers are pretty good guessers. As children become more independent from parents the question of how early should children know about body parts becomes an important communication issue both in terms of caretakers and children’s confidence in themselves.

Put your Right Foot in

Fortunately there are some wonderful games and rhymes that truly amuse and help teach the names of body parts. ‘Head, Shoulders, Knees, and Toes’ can start slowly and get faster until even adults get hilariously mixed up. The ‘Hokie Pokie’ depends on putting body parts in and out of the circle and dancing around; it can be played with the body parts your child knows and expanded as you teach more names. Just following the songs’ directions plays an important part in expanding your child’s listening abilities.

Two other rhymes introduce an important concept that feeds into your child’s math sense. “Where is Thumkin?” and “This Little Piggy” are lots of fun all by themselves but also teach the relationships between a whole and its parts. The notion that both fingers and toes come in sets of five and ten raises number sense as well.

How early should a child know about body parts? Your child already knows. By giving him or her names for those fascinating objects you are helping them feel in control of their bodies and confident about entering the larger world.