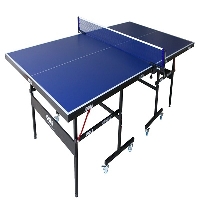 If you have the opportunity to set up a game room in your home, you are likely to want to have that room decked out as well as possible. The kind of game room you decide best matches your family’s recreation needs is going to lead directly to what should go into that room. For example, if you are going for an arcade game room, you are going to want a big television, some video game consoles and a couple of arcade machines.

If you want a different kind of game room, you are also going to want to have plenty of accessories that go along with whatever games are supposed to take front and center. A pool room needs a pool table and accessories. A football fans haven requires a giant television, or many tvs, and plenty of fan gear.

When thinking about what you need for a ping pong game room you are, of course, going to need a ping pong table. Where you put it and what you put around it is what is going to make the room that much better. Luckily for you, we’ve come up with a list of things that will help accentuate what you’ve got in the room and make you love your ping pong game room whenever you set foot in it.

Go big or go home, right? Assuming you have a big enough game room that other games can actually go into it with your table tennis set up, you might want to have a pool table to go along with a ping pong table. For whatever reason, these two sports have gone hand in hand for generations, especially when it comes to home games that everyone in the family can play.

The obvious need is going to be making sure you have the space to put this kind of a table in the same room. You want to make sure you have the kind of space that will everyone to have fun playing both games without any constraints.

Hang the board on the wall and as long as you have enough space to throw the darts, this can be a great addition to your ping pong game room.

One thing people often leave out of their best game rooms is something that will allow them to get a drink when they’re parched after many a gaming time. Putting in a bar with a tap will not only allow you to get a drink without having to leave the room, and you’ll also be able to have a nice little conversation piece in the room. You can choose whether you want to go with an alcoholic tap or you can just have the tap have one kind of soda, or a fancy setup with multiple beer taps and/or soda options.

While a game room is supposed to have room to play games, you are going to want to make sure you have somewhere you and your guests can sit when the game is over or you’re taking a break. Make sure whatever you put in there allows those who are sitting to easily watch the games that are going on. This adds to the fun for everyone.

When you are playing games, you are also going to want to be able to watch games. Make sure you have a nice television that you can watch your favorite show or have on for your guests when they aren’t playing. Something that can be mounted on the wall works best because then you aren’t taking up space and nothing is blocking the view.